The BS hit piece comes as President Trump continues to surge in the polls following the RNC convention and continued leftist riots across the country.

In the garbage report Goldberg uses anonymous sources to accuse President Trump of disparaging US veterans and war heroes.

This was an ugly piece. One attack on President Trump for not attending a World War I cemetery in France was debunked years ago by the White House but Goldberg decided to run the smear anyway. 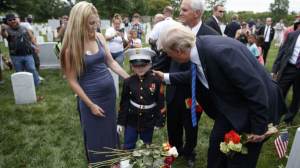 President Trump addressed the smears on Thursday night when returning from another massive campaign event in Pennsylvania.

Mike Cernovich posted several tweets on this outrageous report.
This the first of many hit pieces and lies from the left on our president.

How to spot a fake news story on Trump.