It’s hard to believe but America’s top Infectious Disease Doctor Anthony Fauci has been wrong on the coronavirus pandemic — Almost every step of the way!

Many parts of the United States didn’t do enough to combat the coronavirus — but New York state did, Dr. Anthony Fauci said Friday.

“We’ve got to do the things that are very clear that we need to do to turn this around,” Fauci told PBS NewsHour. “Remember, we can do it. We know that when you do it properly, you bring down those cases. We’ve done it. We’ve done it in New York.”

“New York got hit worse than any place in the world. And they did it correctly by doing the things that you’re talking about,” added Fauci, director of the National Institute of Allergy and Infectious Diseases — and a member of the White House coronavirus task force.

As The Gateway Pundit reported earlier New York state and Governor Cuomo had THE WORST Coronavirus death ratio in the world — higher than any state (except New Jersey) and higher than ANY COUNTRY!

The mortality rate in New York is significantly higher than any country in the world.

According to the Worldometer:

New York State has 1,668 deaths per one million residents.

Only New Jersey had a worse number than New York state with 1,760 deaths per one million residents.

There is not a single country in the world that has worse numbers than New York State. 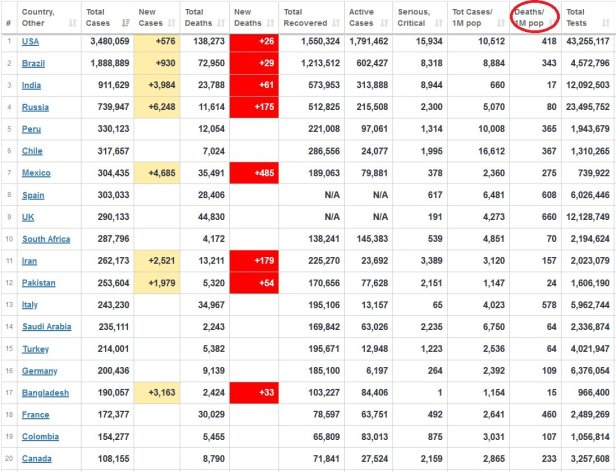 New York did a worse job than ANY COUNTRY on Earth!

It is bewildering why crazy Dr. Fauci still has a job?

Source: STUNNING! Add This to His List of Mistakes– Dr. Fauci Praises New York’s Response to COVID-19 — THE WORST IN THE WORLD!