In a recent report, the Washington Free Beacon reported that ‘Squad’ member Rep. Rashida Tlaib (D-MI) was seen wearing a shirt that eliminates Israel off of the face of the Middle Eastern map. 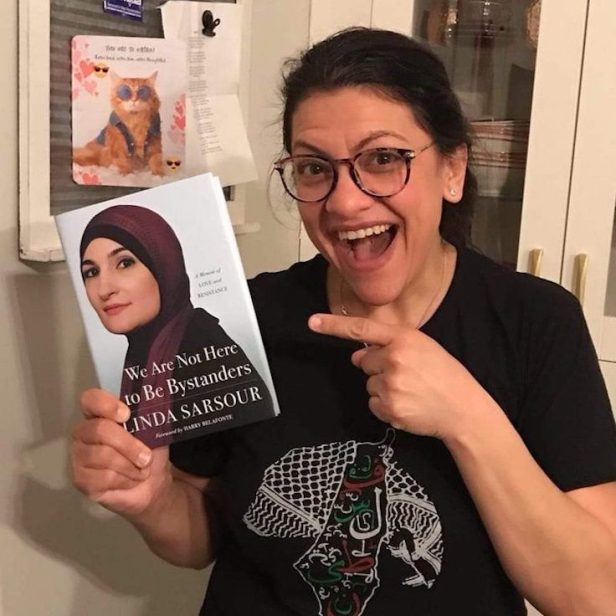 The Free Beacon wrote that she…

“was pictured in the t-shirt while promoting a recently published book by Linda Sarsour, another outspoken critic of the Jewish state who serves as a surrogate for the Bernie Sanders presidential campaign.”

The shirt shows modern-day Israel as nothing more than a Palestinian state. The Free Beacon reported that…

The shirt portrays present-day Israel as a Palestinian state. Shirts of this nature have been a mainstay of pro-Palestinian activists who reject a two-state solution and argue that the world’s only Jewish state should not exist.

“Stand in solidarity with Palestine by wearing this beautiful Palestinian tee-shirt,” reads one online advertisement for the shirt worn by Tlaib. “An outlined map of Palestine is filled with red, white, and green Arabic letters that look stunning from a distance and spell the word Palestine up close. A patterned shemagh wraps around the neck of the Palestinian state like the brave soldiers whose boots stand on the dusty ground.”

Tlaib did not respond to a request for comment.

They later noted that…

Tlaib’s associations with many organizations and causes that single Israel out for undue criticism have also generated deep divides between the congresswoman and the pro-Israel community. They include groups that support the Boycott, Divestment, and Sanctions movement, which critics call anti-Semitic for its promotion of economic boycotts against Jewish-owned businesses.

Ultimately, Tlaib like many of her left-wing collective have banded together in their effort to eradicate the Jews and Israel off of the map, as her anger and hatred of free societies, Jews, and Christians, continues to boil over from her hatred of anyone who opposes her and her ‘squad’s’ radical and hate-driven agenda! Sadly, she has taken cover under the umbrella and safety net of the Establishment media, who have proven that they are willing to do anything, to advance their pro-Marxist, anti-American agenda, even at the cost of the lives of Americans and Jews, as well as our constitutional republic’s free and just society!