In an act of desperation, the Iranian government claims to have arrested those responsible for shooting down the Ukrainian plane during their attack on American military bases, and vows to hold them responsible! However, after thousands of lies, the Iranian government has not only proven that they aren’t trustworthy but also the attacks came from high up in their leadership command, which they will never arrest nor punish, as long as they are loyal to the Khomeini!

Regardless, Fox News reported that…

Iranian authorities have arrested those responsible for accidentally shooting down a Ukrainian passenger plane. Iranian President Hassan Rouhani said that anyone involved ‘should be punished.’

Iran announced Tuesday authorities have arrested those responsible for accidentally shooting down a Ukrainian passenger plane last week as President Hassan Rouhani said that anyone involved in the “painful and unforgivable” mishap “should be punished.”

The arrests come as Iran’s judiciary also has taken 30 people into custody over street protests that have erupted inside the Islamic Republic following the plane disaster. The shootdown and the lack of transparency from Iranian officials – who initially claimed the crash was the result of a mechanical failure – has reignited anger at the country’s leadership.

“The judiciary should form a special court with a ranking judge and dozens of experts,” President Rouhani said in a speech televised in Iran. “This is not an ordinary case. The entire world will be watching this court.”

Iran acknowledged only on Saturday – three days later and in the face of mounting evidence – that its Revolutionary Guard forces had shot down the plane by mistake as it braced for a possible military confrontation with the United States. 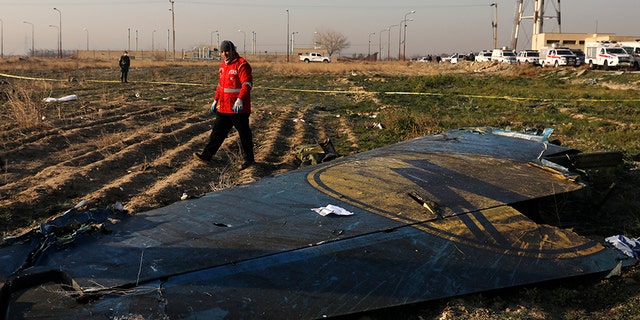 A rescue worker searches the scene where a Ukrainian plane crashed. (AP)

It isn’t a surprise, as the Iranian regime appears to be squeezed from all directions, including by President Trump’s sanctions, and their own people who are protesting! In fact, as we previously reported, even as the Mainstream Media outlets in America eulogized Solomani’s death, and sided with Iran over America, the Iranian people celebrated his death in the streets! You wouldn’t know it if you only watched the Mainstream Media, but regardless of what the left wants people to believe, the Iranian population cheered his death, as he became renowned for his vile hate, his virulent torture, and his evil murder of Iranian dissidents, American troops, and anyone who dared to think differently than their regime allowed! In fact, the protests in the nation of Iran, following the death of Soleimani, had grown to such massive proportions, that M. Hanif Jazayeri took to Twitter and revealed how while the Iranian government chants “death to America”, the people of Iran chanted “Death to the oppressor. Be it the Shah or the Supreme Leader.”

Major new slogan in #IranProtests tonight: "Death to the oppressor. Be it the Shah or the Supreme Leader."

For the record: The MEK are behind these protests for regime change.

(Footage: via MEK activists under the Hafez Bridge in Tehran) pic.twitter.com/IUhuXDevjY

Meanwhile, Iranian protesters cheered for President Trump, as they believe that they finally have a friend in America who will stand by them, unlike when President Obama turned his back on them and sided with the Iranian leadership, rather than the people!

Quickly, they found out that they had a new friend and ally in America, and his name is President Trump, as he tweeted his support for the protesters in both English and Farsi…

His words didn’t fall on deaf ears, as reports of thousands of Iranian protesters not only welcomed his support but chanted…

“Soleimani is a murderer!”

Also, it was reported how the regime had killed their own population, if they dared to question their leadership! In fact, below are just a few of the brave children who died at the hands of the Iranian government and the Khamenei, for protesting the government’s horrendous treatment and murder of dissidents, including more than 1,500 of their own during the most recent protest. Normally, the Iranian Fars News will not report on protests that shed a bad light on the government, but on Saturday, they reported that…

At the Amir Kabir University, a number of students, estimated to be between 700 and 1,000, walked out onto the street and moved to the north side of Hafez and Taleghani intersections. Initially, the Naja agents provided the opportunity for the students to rally and chant, but then with the entrance of the main street and the closure of this spot and the heavy traffic disrupted the students.

The students started with the slogan of mourning today and finally with the slogans against the country’s authorities the rally turned into a radical and radical protest atmosphere.

A crowd of protesters chanted destructive slogans that led to the incitement of a number of people to tear down the banner of Haj Qasim Suleimani. After the Iranian activist Hanif Jazayeri showed that the protests had grown to monumental proportions, he pleaded that the Press Secretary make sure that President Trump and Vice President Pence are informed of the growing and massive protests brewing under the thumb of the Khamenei and his terroristic thugs!

"Death to the principle of supreme religious rule" – #IranProtests tonight by students in Tehran's Sharif University target the very essence of the mullahs' regime. The MEK report more protests in Isfahan & Hamadan

Hi @PressSec, could you pls make sure @POTUS & @VP are informed? pic.twitter.com/YiwMYOG82K

Regardless, to this day, the Iranian regime continues to blame President Trump for their own actions in shooting down the plane, killing 167 souls, as Hassan Rouhani continued to blame the United States strike on the terrorist Soleimani for Iran’s attack that took down an airliner! In fact, he said… 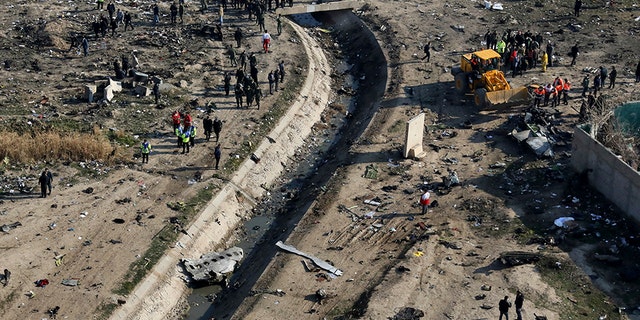 Rescue workers search the scene where an Ukrainian plane crashed in Shahedshahr, southwest of the Iranian capital of Tehran, on Wednesday. (AP)

Today, reports indicate that the regime is placing the blame on their military, rather than on those who gave the orders to launch, as they allegedly have arrested General Amir Ali Hajizadeh, who is the head of the Guard’s aerospace division. The General said that his unit accepts full responsibility for the shootdown, and added that when he had learned about the downing of the plane, he said…

Ultimately, with the combined efforts of President Trump and his Administration, as well as, the Iranian people’s bravery in standing up to the brutal regime, the Khomeini and evil regime are on the brink, as they try to implement every effort to try to pacify their population! Unfortunately, most if not all of their measures are for show, rather than any kind of olive branch or meaningful measure, but only God knows where this will all end!