After leading an anti-American cause on the football field to disgrace our flag, our national anthem, and our nation, Colin Kaepernick claimed that it was about police discrimination and not the flag! However, he then pushed for Nike to kill their 4th of July shoes that bore the American flag, because it offended him, and his fellow Marxists!

Already, Nike has come under fire for their political activism, but this time, Nike has likely crossed a line that will cost them $MILLIONS! After all, when they decided to stop selling the special edition Fourth of July themed shoe because they said that the Betsy Ross American flag on the shoe was “offensive” to Colin Kaepernick, AMERICANS BECAME ANGRY!

However, now Kaepernick has announced on the 4th of July, the anniversary of our nation’s birth, a nation that made him a millionaire for throwing a football, even though he performed poorly, is…as Kaepernick calls it…

“the worst nation in the history of the world”!

In fact, he posted a video with the national anthem playing in the background, while it shows pictures of the KKK, slavery, lynchings, police abuse of African-Americans, and the audacity to play a voice-over reading of Frederick Douglass’ 1852 speech about slavery! In addition, Kaepernick disgustingly states on his tweeted video that…

“What have I, or those I represent, to do with your national independence? This Fourth of July is yours, not mine…There is not a nation on the earth guilty of practices more shocking and bloody than are the people of these United States at this very hour.” – Frederick Douglass”

“What have I, or those I represent, to do with your national independence? This Fourth of July is yours, not mine…There is not a nation on the earth guilty of practices more shocking and bloody than are the people of these United States at this very hour.”
– Frederick Douglass pic.twitter.com/IWLujGCJHn

Ultimately, Kaepernick is so full of hate that he loathes America and all the freedoms that it grants to ‘We the People’! Regardless, Gold Star families slam his hate and his anti-Americanism…

Maybe if Kaepernick hates America so badly, and truly believes that it is the worst nation on earth, HE SHOULD JUST LEAVE!

However, Kaepernick is only a symptom of a much larger disease that rots our nation from the inside out! Sadly, it too many in government have succumbed to their own greed and lust for power, as they no longer consider themselves servants of the American people, but instead as Elitists, who are deserving of luxury and power, as they try to retain that power and wealth through Marxist based government, combined with a Socialist economic system, designed to divide the nation into the Elitist have and the other 99%, who become the have-nots!

Breitbart News reported how Kaepernick is not only attacking America as the ‘worst nation on earth’, but he is accusing the men and women who serve in the United States military of being “terrorists”, and plunderers of the ‘non-white world’! … 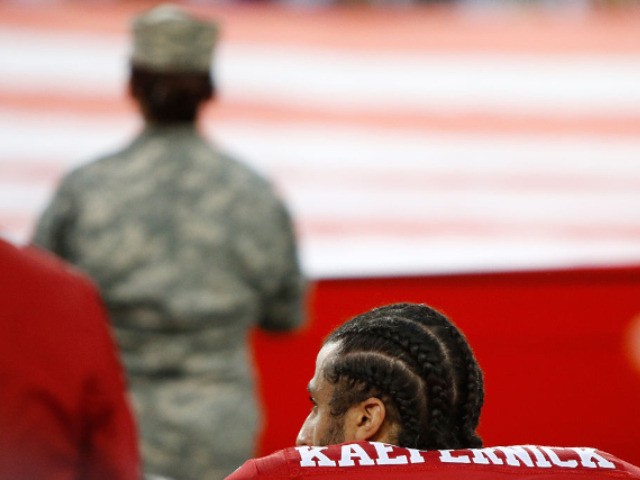 Breitbart News reported that the…

former NFL quarterback and original anthem protester Colin Kaepernick, accused the United States military of terrorist attacks” against “Black and Brown bodies,” and referred to our nation’s service members as plunderers of the “non white world.”

Kaepernick made the statement on Saturday in a pair of tweets posted on Saturday, in an apparent response to the American attack that killed Iranian IRGC General Qasem Soleimani on Thursday.

There is nothing new about American terrorist attacks against Black and Brown people for the expansion of American imperialism.

America has always sanctioned and besieged Black and Brown bodies both at home and abroad. America militarism is the weapon wielded by American imperialism, to enforce its policing and plundering of the non white world.

Kaepernick was attacking the servicemen and servicewomen who carried out the attack on the terrorist Soleimani, as he tried to martyr the sadist and evil terrorist who has carried out the killing of more than 600 American soldiers and at least one civilian contractor! Regardless, in Kaepernick’s hate for anyone who devotes their lives to the service of protecting and safeguarding America and the American people as ‘pigs’, and now terrorists!

Previously, the radical left defended Kaepernick by stating that he was not protesting against the military and that he never intended to disrespect the military, but not that narrative has been proven to be yet another lie by the left! Also, Kaepernick successfully lobbied Nike to pull their “Betsy Ross Flag themed sneakers last summer, and he won!

Part of the media’s narrative in defending Kaepernick had been that, although he refused to stand in respect of the national anthem, the former 49er was not protesting against the military and never meant any disrespect towards the military.

Today, the America-hating left, led by sycophants like Kaepernick and even Bill Maher, have resulted in our nation being under constant threat from not only around the globe from countries like China, North Korea, Iran, radical Islamic nations, and others. But, our greatest threat is an enemy from within our own nation. A group that has spent the larger part of the last 80 years, working to infiltrate America’s major institutions from within our government, our infrastructure, and businesses and corporations like Google, Twitter, Facebook, Mainstream Media, and yes Nike. It is part of a socialist and communist agenda, which is designed to penetrate, infiltrate, and take over our nation, in order to replace our Constitutional Republic with a communist system. Today, it is up to ‘We the People’ to do our part, in upending their political coup and protecting America, as well as our hard-fought freedoms. Sadly, Nike and Kaepernick are just one of the credulous and sickening side-effects of their fight. Therefore, as we see our President implement a pro-American agenda that puts America and American’s first, we will continue to see Democrats form mobs that are designed to disrupt Senate and House proceedings. We will continue to see colleges and Universities threaten and silence anti-communist and pro-American speakers and rallies. We will continue to see Democrats like Maxine Waters (CA-D), Nancy Pelosi (CA-D), Chuck Schumer, Corey Booker, and other radicals call for a ‘Resistance’ and at times violence against those who resist. We will continue to see Democrat Presidential hopefuls like NYC Mayor Bill de Blasio, Former Vice President Joe Biden, South Bend, Ind., Mayor Pete Buttigieg, California Rep. Eric Swalwell, Sen. Kirsten Gillibrand, former Gov. John Hickenlooper, Sen. Bernie Sanders, Sen. Amy Klobuchar, Sen. Elizabeth Warren, Sen. Cory Booker, Sen. Kamala Harris, ex-San Antonio Mayor Julian Castro, Rep. Tulsi Gabbard, former tech executive Andrew Yang, and others, who fight for foreigners over Americans, government power over a powerful citizenry, and climate change over clean streams, rivers, and environment! They fight for foreign oil over domestic oil, foreign jobs over American jobs, and government control over freedom of our citizenry! They fight for the rights of radical Islamic terrorists, over the safety and security of the American people, and make deals with foreign governments, to try to defeat our current President, and all while projecting their own hate, racism, discrimination, and treason upon him, despite no evidence!

Sadly, we will continue to see social media companies silence socialist and communist opposition within our nation. We will continue to see the Mainstream Media call true reporting ‘Fake News’, while personally pumping out their own toxic communist propaganda garbage. Therefore, although we could boycott companies who promote anti-American culture, or tune out Mainstream Media propaganda machines, there is truly only one way to win what has become a nearly insurmountable attack on the fabric of our great nation. WE MUST FIGHT BACK, but not by tuning out or censoring opposing voices. Not by using the government to censor CNN, MSNBC, or other radically out-of-touch institutions. Instead, we must launch an all-out counter-offensive on multiple fronts. Instead of calling for the censorship or boycotting of Mainstream Media, we must tune them out. We must support pro-American media outlets, who are brave enough to publish the truth, despite threats by the Progressive-Socialist left who call for censorship. Instead of supporting anti-American Social media giants, we must use pro-America USA. Life, or Gab. Then, instead of simply deleting accounts with Twitter or Facebook, we need to call them out for blatant bias and lies within their own platforms. Instead of relying on Google to filter out what they want you to see, use Bing, Duck-Duck-Go, and USA.Life to search for unfiltered content and truth. Instead of spending our hard-earned money on Nike, Dick’s Sporting Goods products, or other companies who openly attack our nation or constitutional freedoms, buy from Reebok, Adidas, Under Armor, local retailers, or places like Hobby Lobby or Chic-Fil-A. In reality, we need to stop looking at it as a boycott, and more about conscience spending of the money we earn with people who support our morals, our values, our nation, and our God. We need to pay attention to what is going on in Washington and educate ourselves and our children about national, statewide, and local politics. Then, we need to make time to get out and help fight for candidates at all levels, who fight for those values that we hold dear. Finally, we must GET OUT AND VOTE! Not simply in Presidential elections, but in Midterm and local elections as well. We must pay attention and vote for leadership at ALL LEVELS. Then, and only then, can we save America from the cancer within, which has been rotting our nation from within the bowels of our constitutional republic, and reset our nations course for a future that would make our Founding Fathers proud, and ultimately give our children a future to look forward to that is bright, happy, and free.