As Mainstream Media outlets join hands with the radical anti-gun leftists, they report any number of shootings, but leave out key facts that show the importance of concealed carry, constitutional carry, and the 2nd Amendment!

In fact, one such incident that happened occurred on November 18th, when a man opened fire in an Oklahoma Walmart! The mainstream media focused on the shooting, but failed to note why more people were not injured or killed, and how an armed concealed carry citizen foiled the shooter’s plans!

Two people were killed at a Walmart in Oklahoma by a man who opened fire in the parking lot on Monday before turning the weapon on himself after an armed citizen confronted him.

The assailant, who has not yet been identified, shot and killed a man and a woman in the parking lot and when he was “confronted by an armed citizen, he then turned the gun on himself,” 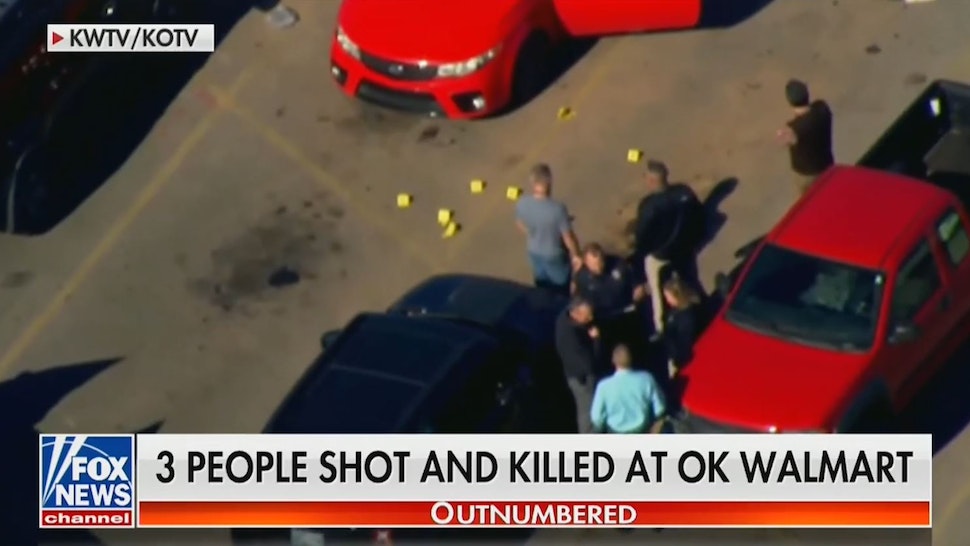 At this time we can confirm a shooting in Walmart parking lot. We have 3 deceased individuals. 1 Female and 1 Male were deceased in the car and 1 Male outside of the car. A handgun was found on scene. We will update as more information comes in.

Another case where an armed citizen stopped armed criminals was reported when a pregnant woman in Florida had her house broken into and was able to save her husband and daughter with her AR-15! They reported that…

“A heavily pregnant mother saved her family from a pair of violent men who broke into her home last week when she grabbed an AR-15 and opened fire on the two men, killing one of them. Jeremy King was at his home several miles away from Tampa late on Wednesday night when two men with masks and firearms broke into the home demanding money. King was pistol-whipped by one of the men while the other man kicked and stomped on his head. King’s wife, who is eight months pregnant, saw the attack unfold and quickly grabbed an AR-15 that the family was in lawful possession of and opened fire on the two men, fatally striking one of them.”

The woman told the media that…

“They came in heavily hooded and masked. As soon as they had got the back door opened, they had a pistol on me and was grabbing my 11-year-old daughter. I’m telling them, ‘I have nothing for you,’ (A)nd they’re like, ‘Give me everything you got.’ It became real violent, real fast.”

Also, the Daily Wire reported in August how a 20-year-old man with a rifle, 100 rounds of ammunition and body armor was stopped in a Missouri Walmart from a potential tragedy when an armed concealed carry citizen was able to stop and hold the threatening man until authorities could arrive! They noted that…

“His intent was not to cause peace or comfort to anybody that was in the business,” Lt. Mike Lucas with the Springfield Police Department said. “In fact, he’s lucky to be alive still to be honest.”

🚨UPDATE: 🚨
At 4:10 p.m. SPD were dispatched to 3150 W. Republic Rd. to a Walmart Neighborhood Market. An armed white male in his twenties was detained by an armed off-duty fireman until officers arrived on scene and took the suspect into custody. More: https://t.co/IZcH3Hn8GV Also in another report, they noted how in 2018, several armed citizens were able to stop a mass shooting in an Oklahoma restaurant! They wrote…

“Initial reports that surfaced late on [May 25] indicated that the gunman was shot and killed by a single armed citizen, but police said on Friday that when the 28-year-old gunman walked into Louie’s restaurant in Oklahoma City and opened fire, hitting three people, he was met by two armed citizens who pulled out their guns and shot and killed him. Oklahoma City Police Department Capt. Bo Mathews said that he was thankful that the only person who died in the shooting was the perpetrator.”

Also, Fox News reported how in a Washington Walmart shooting that was caught on video, a man out to kill innocent civilians was shot and killed himself by an armed bystander, which saved countless lives!

The Police reported that the shooter, Tim Day was a convicted felon who was not allowed to have a firearm, but regardless, he was able to aquire one and go on a shoting spree! Reports indicate that Day was suffering from paranoia! Fortunately, there was an armed citizen at the incident, who was able to bring him down sooner than later!

Tim Day, 44, was shot and killed by an armed bystander in the parking lot of a Walmart Supercenter in Tumwater, Washington, on Sunday. (Washington Department of Corrections)

Newly released surveillance footage showed a gunman shooting his way into a locked ammunition case at a Washington state Walmart this past June, moments before he was shot and killed by armed bystanders.

In the video, released to KING-TV by Tumwater police, 44-year-old Tim Day was seen firing a single shot to shatter the glass case before grabbing a box of ammunition and running into the parking lot. He tried to force his way into two other cars before running out of the frame.

Day stole his girlfriend’s gun before embarking on a violent rampage on June 17, investigators said. He initially tried to carjack a family at a gas station in Olympia, then was seen driving erratically before crashing his car into another vehicle in Tumwater.

Day then tried to carjack at least two more vehicles, according to the investigators. In one incident, he shot through the front windshield of 16-year-old Danner Barton’s car, hitting the teen in the thumb. Day eventually drove to the Walmart in a stolen vehicle.

After he left the store, Day tried to carjack another vehicle driven by Ricky Fievez and shot the man twice when he resisted, cops said. At that point, an armed customer identified as 47-year-old David George shot and killed Day.

Interestingly, Democrats have tried doing the opposite of arming citizens, as they have implemented measures like in California, where the criminalization of gun sales has led to an increase in gun violence. Even with gun confiscation orders, criminalization of private sales, and severe control of firearms, it didn’t stop the November 7, 2018 attack on the Borderline Bar & Grill, killing twelve people, the shooting at YouTube headquarters, the killing of a police officer and young girl by armed illegal aliens, and a number of other shootings.  Also, the Florida gun confiscation orders didn’t stop the Jacksonville Landing attack that killed three people on August 26, 2018. Instead, creating gun-free zones actually only disarm the honest citizens in America, leaving them vulnerable to the hate-driven and violent criminal elements in our nation!

Therefore, constitutional carry concealed carry, and ending gun-free zones are three ways that prevent these tragedies from occurring! After all, criminal’s biggest fear isn’t necessarily the Police, but it is an armed citizenry because they don’t know who will pull out a firearm to defend themselves!