As the 2020 election continues to ebb ever so much closer, Democrats are beginning to grow in concern about what appears to be an impending election disaster for their party! In fact, typically in elections, democrats garner more than 90% of the black vote, and if they ever lose more than 18%, it indicates that they will lose the election in monumental proportions! Now, more than two widely-respected polling services, Emerson and Rassmussen, which are considered reputable have indicated that on average, 34% of American blacks are now in support of President Donald Trump and his agenda, and other polls are beginning to show similar outcomes

Two new polls show black support for U.S. Republican President Donald Trump at or slightly above 34 percent, and that means the president could get 20 percent of the black vote next year, an expert said.

Both Emerson and Rasmussen, two well-recognized polling firms, show black support for the president at 34.5 percent and 34 percent, respectively.

Former Nashville mayoral candidate Carol Swain, who is also a former professor of political science and law at Vanderbilt University, said Monday this news will likely impact the 2020 presidential election.

In fact, Swain stated that…

“I believe that if we continue to do what we are doing now, and expand it some, that it would be realistic for the president to expect to receive about 20 percent of the black vote. And if he gets 20 percent of the actual black vote then it would be destructive to the Democratic Party. As a consequence we can expect that they (Democrats) will fight back with more lies and accusations. There is a problem with crying racism all the time and calling the president a white nationalist — it has become like the boy who cried wolf. And they’re constantly throwing it out at people to the point that it’s totally devalued.”

Already, alliances of black voices have formed, as organizations like Blexit (Black Exit From The Democratic Party), and ‘Black Voices for Trump’, which have led a re-alignment of blacks who appear to be shifting for the first time since after the Civil Rights movement back to the Republican Party!

Conservative activist Candace Owens says she wants to “free” black voters from the decades-long grip of the Democratic Party – and is urging them to support a new movement she’s calling “Blexit.” 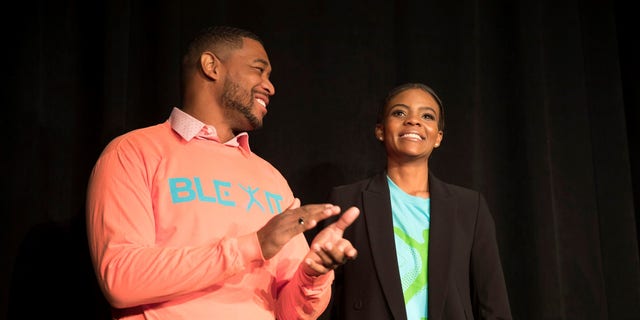 Former Nashville mayoral candidate Carol Swain is one of 35 and counting African-Americans involved with a new initiative to share stories about U.S. Republican President Donald Trump and his accomplishments.

The event featured Ben Carson and Senior Advisor Katrina Pierson, who both emphasized the administration’s policies that have empowered African American communities across the country. Black Voices for Trumpis comprised of black business owners, healthcare professionals, law enforcement officers, veterans, educators, activists and patriots, according to a press release.

“I think President Trump has accomplished far more than the average American knows because so much of the press about him is negative. It does not give fair credit for the things he has accomplished in the midst of turmoil. The president has given more than $100 million to historically black colleges and universities, some of which would have closed their doors had it not been for the president’s support. The president’s administration got through criminal justice reform that has benefitted black Americans more than any other group. The black unemployment rate is at its lowest level ever, and it’s particularly impacting black teens because their unemployment rate has been astronomical. If you look at the black unemployment rate it’s just been a steady decline, so there are more black people working today than ever before.”

Now, after both Rassmussen Reports and Emerson Polling both found that President Trump has the support of 34% of black Americans, and 29% of those black Americans plan to vote for Trump in 2020, a third polling agency known as Marist, found this past week that 33% of non-whites approve of the job Trump is doing, and 29% say they’d “vote for President Trump.”

Interestingly, Carol Swain pointed out how unfairly President Trump has been maligned as President, and attacked as a racist and white nationalist, despite the Democrats previously, throughout Trump’s life heralding him as a respectable leader to the black community! In fact, Swain stated that…

“If you look at the president’s life, he was a Democrat, but no one accused him of racism until he became a Republican. After he became president then he’s (supposedly) a racist, even though the NAACP has given him an award at one point and he was supported by Jesse Jackson and Al Sharpton and many other black leaders. Trump had a close relationship with them until he became a threat as a Republican president.”

The ironies abound in the Democrat Party, as their history shows the truth behind the Democrat Party’s lies and deceptions! In fact, as we already detailed, the Democrat Party over the years has become the party that has encouraged illegal immigration, embraced homosexuality, transgendered Americans, Muslim resettlement into the United States, sharia law which is incompatible with the Constitution, progressive-socialism, liberalism, gun control, abortion, redistribution of income, socialized healthcare, and now Socialism and Marxism. It has been touted as the “party of inclusion;” however, this narrative has been one that has begun to fall apart in recent months, and has proven not to be truly ‘inclusive.’ In fact, despite democrats being truly the party of the Ku-Klux-Klan, the Party who fought against the freedom of slaves, and the Party who fought against giving blacks the right to vote, they have been able to spin their web of lies in a well-done manipulation of the facts. A manipulation that has accused Republicans, and especially conservatives, of being the very force of hatred that they have enacted, and continue to enact upon our society.

Carol Swain and Prager U, detail the history of the Democrat Party. In fact, she shows how the Democratic Party founded the KKK and fought against EVERY SINGLE MAJOR CIVIL RIGHTS ACT in United States History.

Most Americans would think that the Democrat Party, being the so-called party of non-discrimination would be against judging Americans, based on the color of their skin. You would think, as Martin Luther King proclaimed: we should look at the “content of one’s character”. However, in truth, the Democrat Party has long been the party of deception, lies, bigotry, cynicism, hate, and greed. They proclaim Republicans to be racist, but it was the Republicans under Lincoln who freed the slaves. Democrats claim to be the Party of Civil Rights, but it was the Republicans who voted unanimously for virtually every single Civil Rights piece of legislation, while Democrats voted unanimously against every piece of Civil Rights legislation. Even today, Democrats fight for legislation that keeps black Americans trapped in a cycle of poverty. Now, in a twist of irony, the Democrats fight for racism against whites. They fight for ‘white racism’ to push for increased division in our country. They try to pit man against woman, black against white, legal citizen against illegal alien, old against young, rich against poor, and left against right. They are trying to break America apart, and picks a fight within our country that results in a backlash against our Constitutional Republic. You can see it with ‘Antifa’, as the pro-Progressive Communists youth march through our streets covered in masks, just as communists of the past. You can see it in the fact that the Democrats cry ‘racist’ for our President trying to enforce the laws of our nation. Democrats call for a ‘resistance’ against giving hard-working American’s tax cuts. Democrats call for a ‘resistance’ against allowing Christians to practice freely without persecution. Democrats intentionally embrace Sharia law, despite it’s incompatability with our Constitution. Democrats call for ‘resistance’ against allowing American’s the right to a ‘free press’, or ‘right to bear arms’, or the ‘right to be innocent until proven guilty.’ Democrats demonize our Constitution, call our Founding Fathers racist, and criticize anyone who dares to question the burning of our flag, tearing down of monuments, destruction of history, or the showing disrespect to our national anthem or our military, who put their lives on the line for us every day. Now, America’s top Democrat is calling for racism against an honerable, well-qualified judge, simply because of the color of his skin.

It should go without saying, that people should get jobs based on merit, not based on the color of their skin. However, it is Chuck Schumer, who has proven, over and over again, to be the biggest hypocrite of them all. Furthermore, it is the Democrat Party, who have proven to be the ‘Party of Racism’ time and time again. In the end, Chuck Schumer said on the Senate floor that he could not vote to approve Marvin Quattlebaum, for a vacancy on the U.S. District Court for the District of South Carolina because he is a white man, replacing two black Obama nominees. A comment, that if reversed and said by a Republican, would result in the ostracization and removal of the Senator, without question. Therefore, as the Republicans try to implement an agenda that benefits all Americans, regardless of race, color, sex, sexual orientation, or any other identifying factor, democrats continue to try to scuttle the efforts, in their best attempt to try to try to hide  the truth about their Party’s dark and deceptive past.

Fortunately, Black Americans are finally seeing through the radical left’s shrowd of deception, and realizing that the Democrats don’t truly fight for peace, justice, or equality! Furthermore, they certainly are not fighting for black Americans or any other minority! In fact, they are simply using them as a means to their own elitist financial and political ends! Meanwhile, President Trump is plowing through their lies, their deceptions, and their fake news propaganda ministry, as he demonstrates that he not only fights for ALL AMERICANS REGARDLESS OF COLOR, ANCESTRY, RELIGION, RACE, GENDER, OR ANY OTHER STEREOTYPE THAT THE DEMOCRAT PARTY HAS USED TO DIVIDE AMERICA AND THE AMERICAN PEOPLE!

One thought on “A Third Poll Now Shows Black Voters Turning To Trump As Dems Reveal Their Racist Roots Dating Back To The KKK, As President Trump And Republicans Prove To Be The Party Of Equality And Justice”