On October 8th, Fox News released a new poll that showed how the majority of Americans were calling for the impeachment of President Donald Trump. 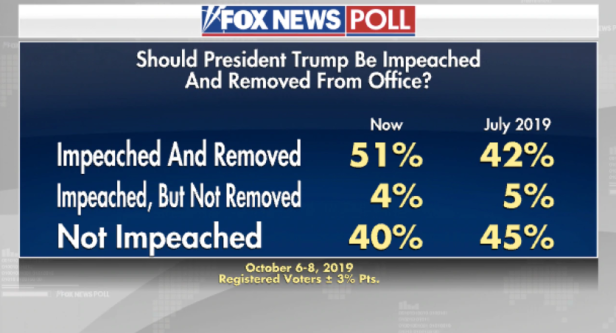 It brought about shock from countless people, as they noted how the numbers didn’t seem to match up with the latest polling numbers, and the expressed sentiments of the average American!  However, that sentiment has now been amplified, as the poll released by Fox News shows that the now leftward headed network fudged the numbers, and weighted the Democrats numbers, making the poll shift from 37% of Americans supporting impeachment and removal, to a whopping 51%!

THAT ISN”T FUDGING, THAT IS FLAT OUT FRAUD!

Check out their polling samples! They aren’t even polling fox viewers!

They are trying to give cover for @GOP to impeach!

Already, Rush Limbaugh, President Trump, and a number of conservatives have labeled the leftward heading network, the ‘Never Trumper Network! Others are blaming their bringing anti-Trumper RINO Paul Ryan onto their board! However, even though he is likely behind the leftward shift, that shift has been going on for some time, as they brought on Donna Brazile, who had just a few short years ago, committed fraud by helping Hillary Clinton cheat during her Presidential debate in 2016.

Now, in the past few months, the conservative lineup at night, including Sean Hannity, Mark Levin, Tucker Carlson, and others have come under attack by daytime radical left-wingers like Shephard Smith, and with little support from the network board! In the end, the question is, will the network continue their radical shift to fake news, or will they defend free speech and honest reporting, like they once did?