Last week, CNN not only spewed their normal hate-Trump, radical left-wing propaganda on the network but instead, they showed just how politically racist they are!

In fact, on CNN, host Don Lemon viciously attacked his guest, Pastor Bill Owens, for daring to meet with President Trump, and refusing to smear the President as a racist! In fact, Lemon repeatedly asked the same question, hoping that he could get the African American pastor to admit that the President is a racist, but Pastor Owens refused each time! As the interview continued, and the pastor refused to smear the President, Don Lemon began smearing the pastor’s Christian faith and his character.

In fact, even the graphic at the bottom of the screen shifted, during the interview, as it went from stating… 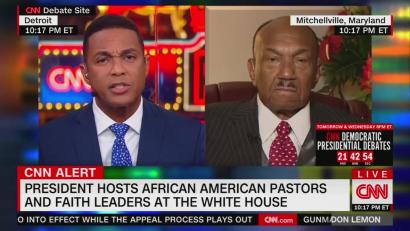 However, as the Pastor refused to smear and attack the President, CNN switched the graphic to…

The interview is below…

DON LEMON: The President met today with 20 African American pastors and faith leaders at the White House today behind closed doors at the White House. Joining me now is one of those pastors, Reverend Bill Owens,the founder and president of the coalition of African American pastors. Thank you so much for joining good evening to you. What did the president say about his attacks against the leaders of color and did any of the faith leaders raise concerns about that?

OWENS: Well, I think something was said in passing. I don’t tune in to negative talk from any side. So, some things were mentioned and I took the position that we as black pastors should go down to Baltimore and see what we can do to help. I’m not going to criticize if there’s a need because I was born poor. When I was up until I was eight years old. I lived in a two room house, no water, no lights, pot belly stove in the kitchen. And until I was eight years old. So I’m from poverty.

DON LEMON: We have a delay. For the sake of time, I don’t mean to cut you off. The question was what did the President say about his attacks against the leaders of color and did any of the faith leaders raise concerns about that?

LEMON: Did anybody there raise concerns about what he’s been saying lately about people like Elijah Cummings or anyone?

OWENS: I don’t think so. I don’t think that at all because I have been to the White House four times in five months. There was nothing about insulating him from anything. He wanted to hear from us. Our concerns and what he could do to help us.

LEMON: So, pastor you have said controversial things before in 2012 you equated president Obama support of same sex marriage to supporting child molestation. You later walked that back. But that in itself is an outrageous statement. Why should anyone take you seriously?

LEMON: This is a quote. ‘If you watch the men who have been caught having sex with little boys you will note all of them will say they were molested as a child. For the president to do this type of thing is irresponsible.’ He walked the comments back saying he didn’t think the president was condoning molestation. Is that not correct? ?

OWENS: That is correct. I never felt the president was doing — as a matter of fact the president is a gentleman. We had a deep conversation with one of his key assistants to talk about the things that we disagreed with. The only thing I disagreed with was same sex marriage. That’s it. The only thing. Then the reporters tried to get me into other avenues and I would not deliver because I feel same sex marriage was unGodly — I took that position then and take it now.

LEMON: So I know it’s hard for you, you think it’s hard to believe that Trump is racist. But he’s repeatedly used racially charged language. He consistently attacks black and brown elected leaders. So, why is that hard to believe? Pastor?

OWENS: I find President Trump, leaders of all colors. He attacks who he will. He’s his own man. I can’t dictate what he should and shouldn’t do. He doesn’t just attack black people. He attacks anybody, and you know it.

LEMON: As a man of faith, as a Christian. He attacks anyone. It sounds like you’re condoning attacks? Is that Christianly? Or Godly?

OWENS: It’s a statement of fact. I’m not condoning anything want president trump doesn’t pick the people he attacks. Because of color. He attacks anybody he feels needed.

LEMON: And is that okay with you?

OWENS: I’m not his judge. I have been attacked. Let me tell you something, let me give you background. I was in seminary. And I started recruiting students for this university. And I got criticism from my leaders. For ministers why are you down at that white man school? So I’m used to criticism. I couldn’t believe it We started out with three students and put 400 students in a university, inner city students…. That this ministry was born out of. Asking the university to give the students a chance to go to college–

LEMON: Listen I appreciate your giving me your biography, I do, but for the same of time, what does that have to do with this president?

OWENS: I was criticizing then and I’m criticized now, direct or indirect, for meeting with the president. What I’m saying is I do what I can to help the young people. Where ever it is, however it is. And I have an agenda to help the black young people and poor people of any color throughout this country. I have done it and I will do it again. I will work with the president on that again.

LEMON: Did you work with President Obama on that agenda?

OWENS: I worked with all presidents on that agenda. All presidents. I’ll work with anybody that wants to help this country and help our inner city young people. I don’t want them to have to go through what I went through to get where I am. Thank God I’m blessed. Starting from nothing on the other side of scratch. I have three university degrees. I thank God for that because God blessed me in this great country.

LEMON: Pastor Owens, thank you so much for coming on. I appreciate your time.

Sadly, Pastor Owens is just one black American who suffers from racist-ridden hate that is subjected to anyone, especially minorities, if they dare question the Marxist based Fascist Elitists who have taken over the Democrat Party! Whether it is the Democrats or their Mainstream Media propagandists, they all subscribe to the racists-laden left-wing ideology and have declared war on Conservatives and pro-America Nationalists who are fighting for America, and the average Americans who have suffered for too long under the leadership of the power-hungry Elites, INCLUDING THE BLACK AMERICAN COMMUNITIES!