Hunter gave an interview to the left-wing New Yorker’s Adam Entous, where he said that he noticed Marine One, carrying the President, flying over his Washington D.C. home! Hunter Biden said he questioned whether President Donald Trump was spying on him, and said to his newest wife Melissa Cohen…

“I told Melissa, ‘I don’t care. Fuck you, Mr. President. Here I am, living my life! I said, ‘I hope they’re taking pictures of us right now. I hope it’s a live feed to the President so he can see just how much I care about the tweets.’”

It is no surprise that Hunter hates the President, as Trump had called out his corrupt dealings, under his fathers Vice Presidential leadership! In fact, President Trump has repeatedly questioned Hunter Biden for profiting off of his father’s influence through business connections with foreign countries like China. He said…

“They ate us alive and then Biden has some kind of relationship financially or his son with China? Tell me about that! Because China ate the United States economically and it’s a shame.”

In addition, it was revealed that Vice President Joe Biden helped force the resignation of a Ukrainian chief prosecutor, on corruption who was investigating a company where his son Hunter was serving on the board, as well as helped to set up a meeting between his father, and a Chinese Tycoon. 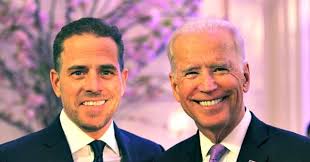 Breitbart News also reported that Hunter was a board member on a Ukranian oligarch-owned energy company, during his fathers time serving as Vice President of the United States! They wrote…

Joe Biden’s son, Hunter Biden, was paid for his work as a board member a Ukrainian oligarch-owned energy company while his father was vice president, the New York Times confirms.

According to the Times, Hunter Biden was paid “as much as $50,000 per month in some months” as a board member of Burisma Holdings, a natural gas firm owned by a member of the Ukrainian oligarchy.

Vice President Biden was heavily involved in mediating U.S. policy towards Ukraine. When a Ukrainian prosecutor launched a corruption investigation into the energy company Hunter Biden was board member of, Joe Biden threatened to withhold $1 billion in U.S. loan guarantees to the country if the Ukrainian government did not fire the prosecutor. As John Solomon of The Hill reported, Biden’s threat would have thrown the former Soviet republic into insolvency at a time when Ukraine was fending off threats from Vladimir Putin’s Russia.

However, raking in millions on corrupt deals, using his fathers Vice Presidential position, isn’t the only problem in Hunter’s past! In fact, in 2016, the Police found a cocaine pipe in Hunter Biden’s rental car, which the Mainstream Media has kindly found it in their heart to bury the story!

Even today, Hunter Biden continues to have a role in, and remains active in a China-sponsored investment fund, despite questions about a 2013 trip to the country with his father, where they negotiated a billion dollar deal, leaving one wondering, just what other secrets is the Biden family hiding, about their corrupt and sinister past, and present!

2 thoughts on “Joe Biden’s Son Hunter, Admits To Vulgar Laced Breakdown Against President Trump, As Evidence Emerges Of His Living A Drug-Laced And Corrupt Life, While Using His Fathers Position For Profit”