On Wednesday, 2020 Presidential Candidate Cory Booker went on a campaign rally trip, but he wasn’t jet set for Iowa or Florida! He didn’t hit New York or Delaware! Instead, he went to campaign on the border, calling for open borders! Astonishingly though, he didn’t even visit Texas, New Mexico, Arizona, or even California! Instead, he flew into Texas, bypassed the American citizens in Texas, and then crossed into Mexico, where he spoke to the migrants in Mexico, to denounce the United States of America, and blame President Trump for all of their problems! During his visit to Mexico, Democrat Cory Booker actually campaigned for better living conditions for illegal migrants. IF ONLY HE WOULD WORK FOR BETTER LIVING CONDITIONS FOR THE AMERICAN PEOPLE! After all, he is only a United States Senator! However, he apparently thinks that his constituency is comprised of foreigners, while the American people are his personal piggy bank!

However, Booker didn’t stop there! In fact, in addition to campaigning for better conditions for the migrants in Mexico, he personally escorted the migrants across the US/Mexico border illegally, and into El Paso, Texas! Reports indicate that the Border Patrol was astonished, as a member of Congress personally violated US laws that were PASSED BY CONGRESSIONAL LEADERS!

'Seeking asylum is a legal right': Democratic Presidential candidate Cory Booker causes controversy by helping immigrants in Mexico return to the US after they were deported as he is slammed for 'breaking the law' pic.twitter.com/w1SKFauQpM

HAPPENING NOW: @SenBooker escorts victims of abuse seeking asylum across the Santa Fe bridge from Juárez, Mexico to El Paso, TX. The asylum seekers were sent back to Mexico under the MPP program. They have asked for their identities to be protected. @CoryBooker pic.twitter.com/FKXcIZAmHC

IN OTHER WORDS, Booker broke the law, he personally advocated for citizens of other nations to blame the American people and ALL ON THE FINANCIAL BACKS OF THE AMERICAN PEOPLE!

The Federalist Papers exposed the true cost of illegal immigration, as they reported…

According to the Washington Examiner, when federal costs are included, illegal immigrants cost $135 billion a year.

States closer to the Mexican border are most affected, but several states throughout the country still pay billions to support illegal immigrants through education, welfare, law enforcement, and medical care.

Here’s the breakdown, provided by HowMuch.net: 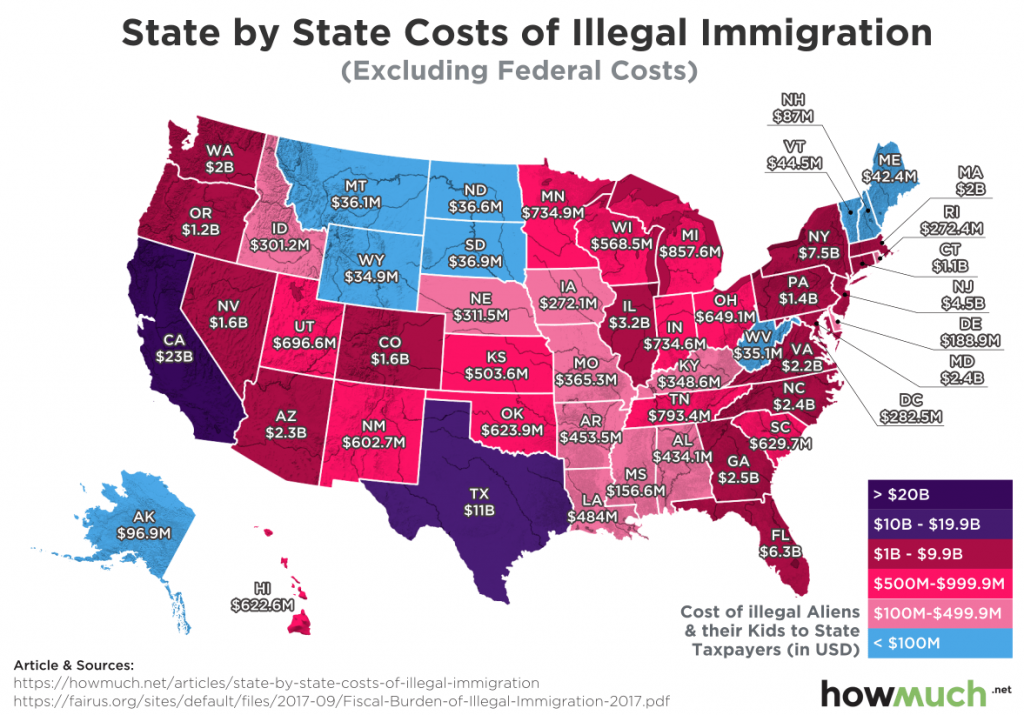 The map doesn’t include federal costs.

According to the Washington Examiner, when federal costs are included, illegal immigrants cost $135 billion a year.

Liberals like to justify their opposition to the deportation of illegal immigrants due to their estimations of initial costs for actually enforcing our federal immigration laws.

But considering that current data suggests over a trillion dollars spent supporting illegal immigrants a decade, leftist arguments that deportation is too expensive crumble rather quickly.

However, the How Much map takes into account taxes paid by illegal immigrants. So the costs represented on the map fall entirely to legal U.S. residents’ taxes.

It is truly time for the men and women who work for the American people, represent ‘We the People’, their constituency, instead of putting foreign nations and people before our own! It is truly time for our elected leaders to put ‘AMERICA FIRST’, and the only way to make that happen is to vote the power hungry, greedy politicians who hate America and the American people out of office, and replace them with pro-America, pro-Constitutional leaders who understand that they work for America’s citizenry, and not for their own self-serving ends!