A Detroit Michigan youth music festival is under fire, as it was uncovered and exposed charging white youth ‘double’ the cost, in comparison to the non-white youth! Interestingly, the event is one being held in Rep. Rashida Tlaib’s district, yet she has yet to condemn the racist pricing!

A festival that is called Afrofuture is being held in Rep. Tlaib’s district next month. It is selling tickets based on race. The event is being sponsored by Allied Media Projects which has since it’s inception sponsored, co-sponsored and or put on events for Democracy Now including events where former President Barack Hussein Obama attended.

Their tickets are free and or cheaper for those attending that are People of Color (POC) and NO free tickets but HIGHER prices for those that are Non Persons of Color (NONPOC). Actually double the price! 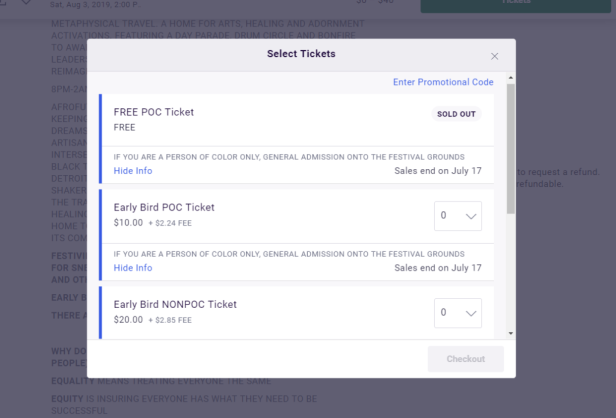 The news is slowly creeping out into the mainstream and this story is of national interest. Racism and or discrimination is illegal. We have federal laws protect us from discrimination based on race. We reached out to the sponsor of this event Allied Media Projects but they have not returned our calls or emails.

A Detroit youth music festival is offering different ticket prices for different races, leading one rapper to withdraw from the event.

The festival posted the following notice…

OFFICIAL LINE UP For Afrofuture Fest IS HERE

The Daily Caller added that a spokeswoman for Eventbrite, one of the ticket hosting websites, said that they…

“will be removed if the terms aren’t changed. Our mission is to bring the world together through live experiences. We strive to provide a platform that enables people to gather for their chosen purpose, and that reflects diverse viewpoints, so long as they don’t violate our Terms, We do not permit events that require attendees to pay different prices based on their protected characteristics such as race or ethnicity. In this case, we have notified the creator of the event about this violation and requested that they alter their event accordingly,” the spokeswoman added. “We have offered them the opportunity to do this on their own accord; should they not wish to comply we will unpublish the event completely from our site”

The backlash didn’t stop with Eventbrite, as Jillian Graham, also known as Tiny Jag, one of the rappers, pulled out of the event, over their basing ticket prices on white vs. non-white prices! Jillian Graham’s spokeswoman said that…

“Tiny Jag wants everyone to understand the effort to black empowerment is a mutual goal but not at the expense of morale. I was immediately enraged just because I am biracial. I have family members that would have, under those circumstances, been subjected to something that I would not ever want them to be in … especially not because of anything that I have going on.”

The Daily Caller noted that the event organizers tried to explain the race-based pricing, by claiming that…

“equality means treating everyone the same,” while “equity is ensuring everyone has what they need to be successful. Our ticket structure was built to ensure that the most marginalized communities (people of color) are provided with an equitable chance at enjoying events in their own community (black Detroit). We’ve seen too many times orgasmic events happening in Detroit and other POC populated cities and what consistently happens is people outside of the community benefiting most from affordable ticket prices because of their proximity to wealth. This cycle disproportionately displaces black and brown people from enjoying entertainment in their own communities.”

However, the event organizers can try to explain away their racist pricing, as they seek to penalize ‘white people’, due to their left-wing hate! However, it is what it is…PURE HATE AND RACISM and that is truly hard to explain away, or especially justify!

Currently, there has been no condemnation from Democrats, or even Rashida Tlaib (D-MI), whose district is holding the festival!