On Wednesday night, the Democrats were not short on the number of outlandish and sometimes mind-boggling statements that they threw out! Whether it be De Blasio promising a 70% tax rate, or Castro’s promise to fight for transgendered biological men the right to abortion, it was a night of political firsts! However, nobody made statements that hit closer to home than Elizabeth Warren’s promise to abolish the health insurance for more than 150 Million Americans! 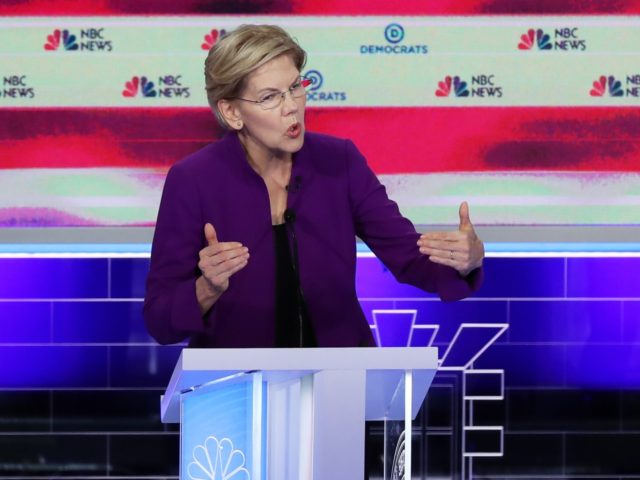 Sadly, Warren proved herself to be nothing more than a power-hungry socialist who looks to take away everyone’s private health insurance! It took me back, as I had to hear it twice, but she didn’t stutter, nor did she even seem ambiguous! FRIGHTENINGLY, SHE WAS VERY CLEAR!

Both New York Mayor Bill de Blasio and Warren raised their hands, but when Warren was called upon, she stated…

“I’m with Bernie on Medicare for All!”

In other words, 150 to 180 million Americans will lose their health insurance, and then be forced into a government run health care,  where all Americans, other than the Elitist Political and financial class, will be forced to utilize a healthcare system that puts the needs of each American at risk!

In fact, with the Democrats single-payer system, or ‘Medicare For All’, it would destroy jobs and create a healthcare shortage overall. After all, if hospital and doctor reimbursement rates are set too low, it will lead to eventual bankruptcy. That means fewer medical options for patients and fewer jobs for healthcare professionals and their support staff. Therefore, as more and more hospitals and doctors close, it will lead to a perpetually growing LONG WAIT for patients. Even more frightening with socialist healthcare is the fact that the growing list of those waiting for leads to prioritization and eventually rationing of care, leaving countless Americans without any access to healthcare at all! After all, under socialized medicine, an insurance card does not equate to access to medical care itself! Furthermore, as rationing begins for expensive therapies, the most expensive medications would also be rationed to alleviate costs. As a result, drug companies would then be forced to decrease research and development, leading to fewer medications, fewer treatments, and fewer lives saved, all in the name of the Marxist ideal of…

Finally, after the cycle of implementation for ‘Single Payer’ healthcare, medical access and medicine would be limited, and since single-payer healthcare is a government-funded program, taxes will increase for ALL AMERICANS to pay for the program. Therefore, taxes would skyrocket under the new program, as healthcare is one of the largest sectors of the economy of a nation!

Even more problematic, is the fact that Medicare’s trust fund is scheduled to go “belly up” in seven years, which means the massive government program will be operating at a deficit for the foreseeable future. That means when the money dries up, a recession hits, and fewer people entering the medical field, the government would be forced to ration! That means, it wouldn’t matter if you have insurance, because it would be worthless! Meanwhile, taxes would continue to spiral upward, as to remedy the rationing, which would LEAD TO NOT ONLY THE SICK HAVING NO MEDICAL CARE, BUT BE CHARGED MORE TO PROP A FAILING HEALTHCARE SYSTEM UP!

“Insurance companies last year alone sucked $23 billion in profits out of the health care system, $23 billion. And that doesn’t count the money that was paid to executives, the money that was spent lobbying Washington. We have a giant industry that wants our health care system to stay the way it is, because it’s not working for families, but it’s sure as heck working for them.”

However, she fails to note that the Insurance companies made the $23 billion in profits because that is what businesses are supposed to do…MAKE MONEY! However, her failure to mention the fact that legislators laws that ban companies from crossing state lines, as well as other politically motivated policies, has led to little competition, therefore higher prices! If competition between Insurance companies was allowed across State lines, it would flood every state with insurance companies competing with one another. After all, THE MORE COMPETITION BETWEEN BUSINESSES (INCLUDING INSURANCE COMPANIES), THE LOWER THE PRICES! THE LESS COMPETITION, AS POLITICIANS, HAVE CREATED, THE HIGHER THE PRICES FOR INSURANCE!

Interestingly, more than 71% of Americans are satisfied with their current employer-provided health coverage, and options like Samaritan Ministries and other health-sharing programs have grown out of the utter failure of Obamacare, in the wake of its disastrous effects on American’s coverage!

Regardless, Warren, and really the ENTIRE DEMOCRAT 2020 FIELD OF CANDIDATES FOR PRESIDENT, all push for more government control over healthcare, and an end to private healthcare and insurance! That means NO CHOICE, HIGHER PRICES, AND RATIONING OF HEALTHCARE SERVICES!

Furthermore, where would Americans go if they are unhappy with their healthcare coverage and services? You cannot shop around, because there is only one option! You cannot hold anyone accountable, because we know how easy it is to get our elected leaders to listen to us! You cannot change providers, because there wouldn’t be any others! You cannot petition for cheaper prices, because the prices and access to care is pre-determined!

Just imagine if you are unhappy with your IRS refund, or the treatment you received at the DMV! You simply have to suck it up, and go home! Imagine if your treatment went horribly wrong today due to incompetence! The government would be outraged and make a stink! However, if it is the government providing the care, there would be such silence, you could hear the crickets chirping!

In the end, Elizabeth Warren, and most Democrats call for ‘Medicare For All’ is not an effort to make things better! Instead, it is a Marxist idea, that makes the entire system worse, which would make our healthcare system worthless to the American people!