CNN’s Jim Acosta has been on a warpath for notoriety, in his quest to destroy President Trump! He has attacked, mocked, threatened, demeaned and besmirched the President at every turn since Trump descended down the escalators at Trump tower to announce his candidacy for President of the United States! He has attacked, and criticized Presidents sons, daughter, and wife! He has encouraged violence against the First family, and promoted fake news, in regards to the President and his agenda almost daily! Acosta, much like the rest of the Mainstream Media have even degraded, made fun of, and encouraged violence against the President’s Administration, and the American voters! Now, after the bulk of the Mainstream Media’s news reporting over the past few years has been proven to be a lie, following the release of the Mueller Report, Acosta has released a new book…

‘Enemy of the People, A Dangerous Time To Tell The Truth In America’

However, the irony abounds, as the book spine fittingly reads ‘Enemy of the People – Jim Acosta’! Furthermore, Acosta is right, in that it is a dangerous time, to tell the truth in America, as Conservative and pro-Trump journalists and Americans are being thrown off of Twitter, Facebook, YouTube, WordPress, and even the internet itself! Conservative talk show hosts like Sean Hannity, Laura Ingraham, Tucker Carlson, and others are having left-wing Marxists and Mainstream Media organizations target advertisers and networks, in their attempt to strip their Constitutional rights of freedom of speech and the press! Trump Administration officials are being attacked in restaurants, movie theatres, gas stations, and even in their own homes, simply for their ideological beliefs! Christians are even being targeted for holding true to their core religious beliefs, as they are expected to hold their tongue and remain silent about their beliefs! Therefore, IT IS A DANGEROUS TIME, TO TELL THE TRUTH IN AMERICA, ESPECIALLY FOR CONSTITUTIONAL CONSERVATIVES, CHRISTIANS AND FREEDOM LOVING AMERICANS!

Therefore, Acosta is right, because of he, as well as his network, and fellow Mainstream Media propagandists, who dare to demonize anyone who dares fight to defend the fabric of our nation, the Constitution of the United States, and especially fights for God and his word!

Regardless, Jim Acosta has made a household name for himself, as he has become the face of “fake news” and shoddy reporting. In fact, Jim Acosta has found his calling, as he is incredibly good at breaking the rules, creating a fictional story, attacking his enemies, like President Trump and his supporters, and then playing the victim when his lies, distortions, and bitter hatred come around to bite him in the rear! In fact, just one example was when the White House revoked Acosta’s press pass after pushing a White House intern! Then he played the victim, and claimed that he had a right to be in the press room!

Then, during an interview by Stelter on his own network CNN, Acosta said the President makes sensationalist false statements repeatedly, and that…

“The President has made 10,000 false and misleading statements, since the beginning of his Administration”

However, Acosta like much of the Mainstream Media has projected their own false and misleading statement, as they repeatedly accuse the President of false statements, but cannot give actual examples! Then, the Media is repeatedly shown over time to be lying, and the President proves to be the factual one!

Acosta went on to say…

“I wanted to send a message to folks who really care about what we do and the message is basically this: I did not want my children to grow up in a country where the press is called ‘the enemy of the people.’ Brian, you and I have grown up in a country where the last several decades here where Republicans and Democrats wanted to be in power in Washington but they didn’t demonize us to this extent. I think it’s gotten– I think it started off as an act based off my reporting. The president threw out ‘fake news’ and ‘the enemy of the people’ at the beginning of the people, just sort of to taunt and troll us and that is, essentially, gotten out of control. Now it’s gotten to the point where some of his supports, some of his supporters are – many of them are wonderful people – some of his supporters feel it’s okay to lash out at us in ways that I think put as in danger.”

“And I think we have to pause, hit the pause button and think deeply about whether or not this is the kind of country we hand off to our kids. Some of your critics say if it really was a dangerous time to tell the truth in America, you wouldn’t be able to write a book about it. What do you say to them?”

“Well, I don’t want it to become a more dangerous time and as you and I both know, Brian, we had a pipe bomb delivered to CNN’s headquarters last fall. As I lay out in this book, I have received a number of death threats. I’m not the only one. A number of reporters and news anchors who cover this president on a daily basis have received death threats. And, you know, we never know how serious they are. It could be people just venting off their frustrations and I get that. We all get mad about what we see on the news on a daily basis… And the question is whether or not somebody crosses that line and does something that hurts somebody or, perhaps, kills a journalist. And as I write in the book, Brian, I think at that point we cross over into a different era for the United States, where we join a list of other countries around the world where the press is not safe to do their jobs,” Acosta concluded. “We just can’t do that. We cannot do that. We cannot take that step. It’s far slippier slope than we’ve possibly imagine at this point.” 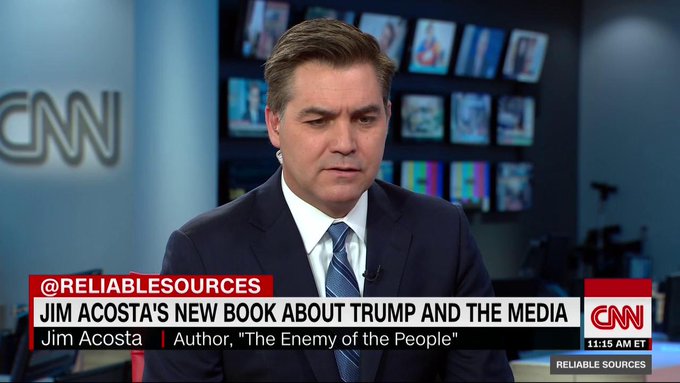 Regardless, CNN’s Jim Acosta said that he ‘Regrets’ that the Media Did Not Stand in Solidarity More Against Trump!

In fact, Acosta stated it on CNN’s ‘Reliable Sources’! He lamented he has “missed some opportunities” to challenge the President! Therefore, he is far from an unbiased journalist, and instead, a pro-Marxist propagandist for the radical left-wing Democrats!

“You know, I wish at times that the press had been a bit more in solidarity with one another in standing up to this White House and saying, ‘Listen, ‘You know, the president can’t call us the enemy of the people. We’re not going to go along with that.’ I think we’ve missed some opportunities here and there to challenge that. I will say, one thing I’m most grateful for during this experience is how just about every news organization in Washington and here in New York stood behind us here at CNN when they took away my press pass. That was a very important first amendment case. And I talk about it in the book. Had the Trump administration won that case, Brian, it would have sent shockwaves through our industry. It would have put a real chilling effect on the First Amendment in this country.”

Today, Jim Acosta has become a symbol of everything wrong with our Mainstream Media! He parades himself as a journalist, a “defender of truth and honor”, and all while spreading the sickness of hate, of evil, and of anti-American ideals! Acosta, like much of the Mainstream Media, tries to parade as defenders of truth, yet all while spreading hatred against those who dare oppose their own Marxist ideological agenda! They hate President Trump because he puts the people of America, before that of the ideologically Marxist left and their globalist agenda!

Sadly, Acosta showed how he only cares about himself, as he stated in his interview with Stelter that he feels ‘unsafe’ as a so-called journalist in America! It is really a pompous and audacious comment, considering journalists who are reporting in the Middle East on terror organizations, while Acosta sits in the lap of luxury of Washington D.C.! Meanwhile, as the left-wing Mainstream Media speaks their minds freely, the pro-Constitutional, pro-America, freedom loving media is smeared and attacked by the Mainstream Media, Democrats, and Silicone Valley giants like on Twitter, Facebook, Google, and others! Yes, Acosta’s book title is very much appropriate… ‘Enemy of the People, A Dangerous Time To Tell The Truth In America,’ because it truly captures how dangerous and how sinister our Mainstream Media has truly become!