We are the 17.4 million and we deserve to be heard.

May 23rd is our chance to Change Politics for Good.

Some laughed it off, believing that it would go nowhere, but it now seems that Farage is getting the last laugh.

For example, it now appears that Farage’s Brexit Party is pulling ahead in the newly released General Election polls, including ahead of the falsely-labeled Conservative tories! 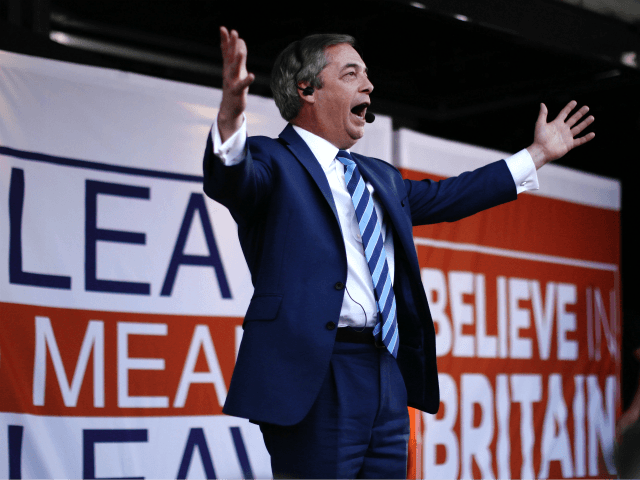 Even more concerning for the radical left-wing Establishment candidates is the fact that Nigel Farage’s Brexit Party has not only been polling in first place for the upcoming European Parliament elections, but it has now pulled ahead of the governing Conservative Party in polls for general elections to the House of Commons.

The latest major poll of Westminster voting intentions, conducted on the 9th of May by ComRes, shows the Brexit Party up five points at 20 percent, while the Tories under embattled prime minister Theresa May have sunk four points to 19 percent. Also, the opposition Labour Party, who is led by the pro-Marxist leader Jeremy Corbyn, is in the lead on 27 percent. However, they are down six points in polls, from recent polling! The left-wing propaganda news provocateur known as the Guardian showed their concern, as they reported that…

Senior Tory and Labour politicians have issued frantic calls to their voters to back them in next week’s European elections after a new poll showed support for Nigel Farage’s Brexit party had soared to a level higher than for the two main parties put together.

The Opinium survey for the Observerplaces the Brexit party on 34%, when people were asked how they intended to vote on 23 May, with Labour slipping to 21% and the Conservatives collapsing to just 11%. Ominously for Theresa May, support for the Tories at the European elections is now less than a third of that for Farage’s party, and below that for the Liberal Democrats, who are on 12%.

The poll suggests the Brexit party, launched only last month, is now on course for a thumping victory that Farage will, MPs fear, use to back his argument that the UK must leave the EU immediately without a deal.

There were signs of mounting panic and recriminations in both Tory and Labour ranks as their MPs attempted belatedly to mount “stop Farage” operations.

May was accused by senior Conservatives of “fuelling populism” with her indecision over the Brexit issue, while Labour politicians urged their backers to come out and vote despite the party’s mixed messages on Europe, which are depressing its support.

Richard Corbett, Labour’s leader in the European parliament, said: “Labour voters must turn out and vote to stop a far-right extremist claiming he represents Britain.”

Writing for the Observer online, the former prime minister Tony Blair says it is vital that Labour supporters go to the polls, even if they choose a party more clearly in favour of Remain than Labour.

“This is not a vote to choose a prime minister or a government,” Blair says. “It is a vote for the Farage Brexit; or against it.”

Although there are multiple Party’s in the British Parliament, power has shifted between the once-Conservative Tori Party and the Socialist Labour Party since 1922! Now, for the Tory Party, which is known as the oldest political party’s in existence, Farage’s Brexit Party appears to risk the Tories very existence! It is unprecedented, and now the Tories are reaching out to the Brexit Party in the hopes to merge the two Party’s because they fear their own extinction! It is amazing that the formation of the Brexit Party and its rise to popularity has occurred in a mere few months! In fact, even though the Brexit Party is a few months old, it already has more support than the Conservative and Labour parties combined!

Now, as it seems that the Party is becoming unstoppable, the Marxist supporting, Establishment endorsing, Mainstream media has launched incessant attacks on the Party’s founder Nigel Farage, who has a long history of pro-Christian, pro-Conservative, and pro-Trump values, as well as attacking the Brexit Party itself!

The elections for the European Parliament are set to take place between May 23rd and 29th, and each country gets an allotment of representatives to send to the European Union. Meanwhile, Nigel Farage has declared political war on those who have turned their backs on the will of the people in Britain!

Ultimately, it appears that Farage and his Brexit Party is set to not only hold onto the ground that they have gained but surpass all expectations and win back the nation, later this month! Furthermore, President Trump is certainly watching the upcoming election, as the UK government had forbidden a meeting between Nigel Farage and President Trump during the Presidents former visit! A bit of irony, as it looks like Farage will likely take the reigns, as the Establishment tries to find a way to stop a candidate who serves the people of the UK, rather than the government Elitists, as in days of old!