As new reports, fresh of the presses begin to emerge over yet another Democrat scandal, the Progressive-left has remained hush.

The story emerged on Saturday, when Democrat lawmakers, which included Senator Bob Menendez (D-NJ) who was spotted on the beaches of Puerto Rico. They were attending at the behest of the ‘BOLD Political Action Committee (PAC)’ that has contributed millions to the Democrat Congressional Hispanic Caucus. 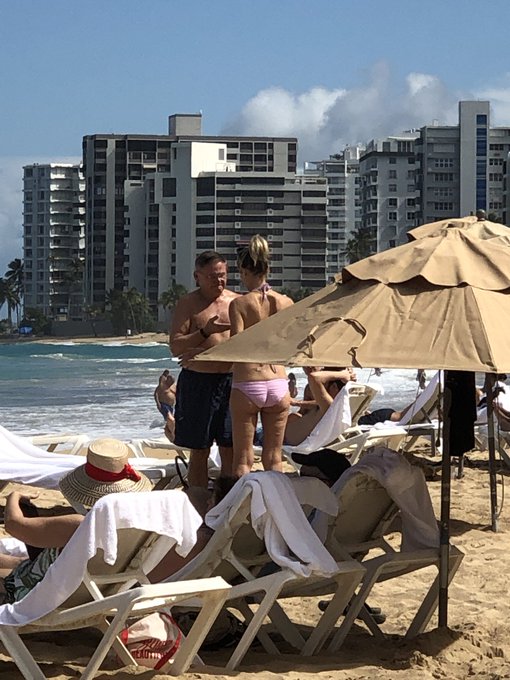 Spotted: Sen. Bob Menendez on the beach at a resort in Puerto Rico on Day 22 of the partial government shutdown. Reports say dozens of Dems are in PR for the CHC BOLD PAC winter retreat — including meetings on Maria cleanup, and a party with PR’s “Hamilton” cast.

To date, the partial government shutdown is on its 26th day, and while Republicans have been giving up their pay during the shutdown, introducing legislation to make sure that federal employees still receive their pay regardless of a shutdown, and a bill as well that would withhold Congressional pay during future shutdowns, House Speaker Nancy Pelosi (D-CA) flew in her taxpayer-funded private jet to vacation in Hawaii, and at least 30 House and Senate Democrats have now been seen in Puerto Rico, after they flew in a chartered jet, and were seen partying with bikini-clad women on Puerto Rico beaches.

A memo exposed how 109 lobbyists and corporate executives are entertaining the Democrats at the seaside resort in Puerto Rico. They include Washington D.C. firms like R.J. Reynolds, Facebook, Comcast, Amazon, PhRMA, Microsoft, Intel, Verizon, and unions like the National Education Association (NEA). The memo says…

“This year’s winter retreat promises to be our most widely attended yet with over 220 guests, including 39 Members of Congress and CHC BOLD PAC supporters expected to attend and participate!”

In the meantime, they try to portray themselves as the defenders of the federal employees who are now struggling to make their mortgages and bills, yet it is President Trump who has been working diligently to help the workers out. As a result of the President’s work, he has secured the Coast Guard’s pay during the Christmas holiday and been working alongside his Administration to make sure that banks give them a grace period for their loans, and ensure that they get retro-active back-pay.

Democrats in Congress are so alarmed about federal workers not getting paid they’re partying on the beach instead of negotiating a compromise to reopen the government and secure the borderhttps://t.co/zpJypJ2Slq

While @realDonaldTrump is in DC working to resolve the government shutdown and secure our border, Democrats are hitting the beach and partying with lobbyists.https://t.co/SJBr0tV3H8

Democrats have attacked Republicans as being the cause of this shutdown, but the only reason that the shutdown occurred, is because they refuse to allow $5.7 billion to fund a border wall to secure America! Ironically, although Democrats have deemed the Presidents idea of securing the borders and building a wall racist, as recent as 2009, Senator Chuck Schumer resoundingly echoed the words of now, President Trump, in regards to immigration. In fact, the following is a piece that shows how eerily similar the words of Chuck Schumer (D-NY) and President Trump are, in regards to illegal immigration and border security.

Today, Democrats are decrying the President’s actions to secure the border as racist, hate-filled, vile, and xenophobic (intense or irrational dislike or fear of people from other countries). Ironically, just a few years ago the Democrat Party as a whole resoundingly echoed President Trump’s goals and initiatives and called it ‘reckless’ not to secure the American border…

Today, Democrats have made a complete reversal of policy for various reasons. First of all, as they have witnessed a backlash, due to their radically unpopular progressive, socialist and communist ideals, Democrats have begun to rely on the influx of pro-Socialist minded immigrants into the United States. After all, they have adopted the idea that if you can’t win over the minds of the voters, import new voters! Secondly, President Trump has proven to be a thorn in the side of the progressive-socialist and communist ideologues. Therefore, they assembled a communist style ‘resistance’ that is designed to antagonize, defy, and thwart ALL OF PRESIDENT TRUMP’S CAMPAIGN PROMISES AND PRESIDENTIAL INITIATIVES!

The House passed a stopgap funding bill on Dec. 20 that included $5.7 billion to construct a wall on the U.S.-Mexico border, however, with a 51-seat majority, Republicans fell short of the necessary 60 votes needed to send it to President Donald Trump’s desk for signature. Senate Minority Leader Chuck Schumer vowed to kill the legislation on arrival in the Senate, and consequently, a government shutdown has been in effect since funding expired Dec. 21.

The Democratic leaders pledged not to appropriate a single dollar towards funding a wall, and Pelosi further promised to put forth a funding bill that does not include any of Trump’s demands when she assumes the speakership in January.

Yes, today a small segment of our federal government is ‘shut down’, not because the President refuses to negotiate, but because the Progressive-Socialist ‘Resistance’ has made defying not only some of the Presidents promises the sole agenda for their Party, but EVERY INITIATIVE IN HIS ADMINISTRATION! In addition, Democrats know that in order for their socialist agenda to survive, open borders are their life-line for survival.

Now, Reminiscent of House Speaker Nancy Pelosi’s “You Can See What’s In The Bill After We Pass It” comment during the Obamacare fiasco, Democrats are now saying that “We’ll Talk After Shutdown Ends,” meaning that they want the President to give up any leverage he has, and then he will get nothing in return! Even more concerning, is the fact that now, one of the largest Honduran caravans have formed and is now headed to the United States border yet again!

In the end, President Trump has offered generous deals that gave millions to fund Democrat requests including humanitarian aid to illegal migrants in Mexico on the American border. He also offered DACA concessions, as well as other requests of Democrat leadership, but the Democrats said that they would not compromise, or do anything that allowed the President to build a wall, or even a steel barrier like Bush and Obama did during their Administrations! Furthermore, although the President said that he was willing to compromise, he said the one thing he WOULD NOT COMPROMISE ON WAS ON THE SECURITY AND SAFETY OF THE AMERICAN PEOPLE!

The President has continued to push for a compromise in Congress, but Democrats have said that they would not give him a dollar for the wall, which leads the talks into a stalemate. As a result, President Trump is continuing to explore and look at additional funding options to begin construction on the wall. One of those options includes declaring a national emergency, which the President said is a last resort! However, ultimately, the president has a right to declare a national emergency, and the President has publicly called it an “absolute right” if he has to. Regardless, for the time being, he is holding out hope that a deal can be made with Congress.

4 thoughts on “Democrats Caught Vacationing And Partying With Bikini-Clad Girls During Government Shut-Down, As President And Congressional Republicans Try To Find Solution”