Reports from multiple sources both inside and outside the caravan have indicated that the band of migrants are plotting to gather together and march through the port of entry, into the United States, despite the strong border patrol and military presence.

As more than 20,000 migrants have arrived in Tijuana, but a number of migrants have openly admitted that they don’t want to live in Mexico, but instead prefer the United States, likely due to Americas ‘welfare state’ that Democrats and RINO (Republicans In Name Only) have created. As a result, tens of thousands of migrants can come into the United States and claim welfare, food stamps, and other benefits, and live in luxury, as compared to their Central American nation of origin. Furthermore, Democrats are fighting for them to come across the border due to their propensity to vote for the Democrat candidates, who will continue to enable them to collect benefits, and live off of the American people, regardless of their lack of citizenship.

President Trump tweeted out Sunday that it…

Would be very SMART if Mexico would stop the Caravans long before they get to our Southern Border, or if originating countries would not let them form (it is a way they get certain people out of their country and dump in U.S. No longer). Dems created this problem. No crossings!

Regardless, the group of migrants reportedly are continuing to plan an attempt to illegally enter the US through the “more spacious” vehicle lanes at San Ysidro.

According to the Epoch Times, a 26-year-old Honduran construction worker, Marco Gómez, who is part of the caravan said that they want to “send a message” to President  Trump to “open the gates.” He said…

“We’ll stay together and be strong, and then move on to the United States. Peacefully, like people going from one country to another. Marching.”

When asked about what they plan to do if they are successful, he replied that they are unlikely to apply for asylum because he says…

Frank Martinez, who is another member of the caravan said…,

“I personally, and I know many people will attempt to do the same thing—it’s to cross illegally. I will enter illegally, because we want a better life, and I’m in a hurry. It’s not my intention, to stay here, in this country. My intention is the United States.”

Martinez is not alone in his lack of desire to accept Mexico’s offer for asylum. Nearly all of the migrants want to cross into the United States, where they can reside and live off of the taxpayers dole.

Already, tent cities in Mexico have been growing rapidly, as caravan after caravan arrives, with the intention to cross into the United States. 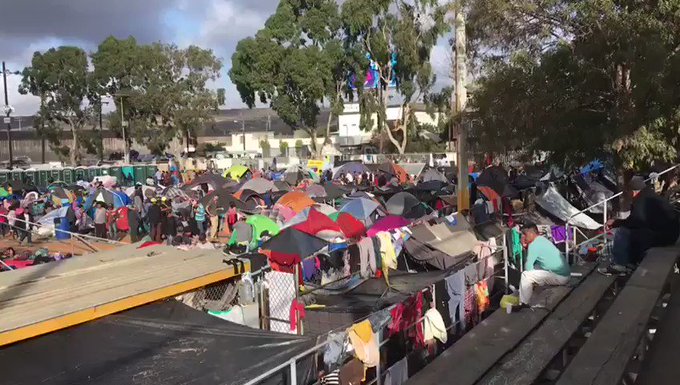 An area of the migrant camp in Tijuana that was virtually empty the other day. We are told up to 5,150 people are packed in here now.

Another interesting detail that was highlighted in videos taken by the Epoch Times showed the caravan members standing in line for food in Tijuana, Mexico. Interestingly, with 5,150 migrants already in the camp, and as they lined up for food, there was no signs of women and children, despite claims by the mainstream media and left-wing open borders organizations.

The line for food just outside the camp confines. Free meals are served at 10am and 5pm. There are 5,150 migrants now at the camp in Tijuana. pic.twitter.com/6BRcbcWRHg

In another video posted by Pueblo Sin Fronteras, one of their leaders stated that they were planning to attempt a border crossing into the United States on Sunday, November 25th. They said…

“The best day to go to the bridge—peacefully, not with violence—is on Sunday. And write banners with our points — and we don’t want the media to publish this before we do it.”

Already, the United States has had to deal with violence against border patrol police officers, when a previously deported illegal alien had climbed a tree to avoid being arrested by Yuma Sector Border Patrol agents. Then, he set the tree on fire and began throwing rocks at the agents and at an Air and Marine helicopter. Fortunately, during the assault on the agents and military helicopter, the illegal alien was unable to injure authorities. During an immigration interview, the man revealed he was a 31-year-old Honduran national who illegally entered the U.S. Officials said the man claimed to be part of the migrant caravan. As it turns out, the Honduran national has a criminal history and had been previously arrested in Florida, and repeatedly deported. The latest deportation was in June of this year. In other words, almost as soon as the United States deported him, he returned to violate United States immigration laws yet again.

“If for any reason it becomes necessary, we will CLOSE our Southern Border. There is no way that the United States will, after decades of abuse, put up with this costly and dangerous situation anymore!”

Regardless of the Presidents stern warning, and according to Fox News, they reported that…

they confirmed through an organizer for Pueblo Sin Fronteras, the group helping organize the leading Central American migrant caravan, that members of the caravan are expected to march peacefully to the point of entry at San Ysidro, Calif., on Sunday at 12 p.m. ET.

The marchers are expected to head out from the stadium, where many have been staying, and attempt to cross the border in a major test for both U.S. border authorities and Mexican officials. On Saturday, the first episode of caravan-related violence directed at U.S. authorities was reported by U.S. Border Patrol in Arizona, as a 31-year-old Honduran man who apparently split off from the caravan threw rocks at agents and a helicopter after setting a tree on fire.

We will update, as more information becomes available.

One thought on “After Caravan Migrant Already Attacked Border Police And Military Helicopter, Some In Caravan Planning To Test United States Border Security, As They Reportedly Plan To March Through Checkpoint”