In their latest attack on our nation,  Democrat House Minority Leader Nancy Pelosi, Democrat Senator Mark Warner, Democrat Representative Adam Schiff, and Democrat Senate Minority Leader Chuck Schumer have taken it upon themselves to pen a letter to the Department of Justice and the FBI, and demanded that the two departments that WORK FOR THE PRESIDENT OF THE UNITED STATES, and at his pleasure to REFUSE and DEFY President Trump’s Declassification order.

In what seems to be pushing for a ‘Constitutional Crisis’, the Democrats have sought to usurp the Presidents authority to undermine the office of the President as a last-ditch effort to stop him from revealing the truth involving the Russia investigation to ‘We the People’. In addition, the Democrats have tried to demand that the powers reserved to the Office of the President, be transferred over to their Congressional Offices…A major violation in the Constitutions ‘Separation of Powers’. The Democrat leadership delivered the letter to Director Coats, Deputy Attorney General Rosenstein and Director Wray, and demanded that…

“Your agencies’ review, and any communication with the White House on the substance of the material, should not proceed further until you have briefed the Gang of Eight in person.” 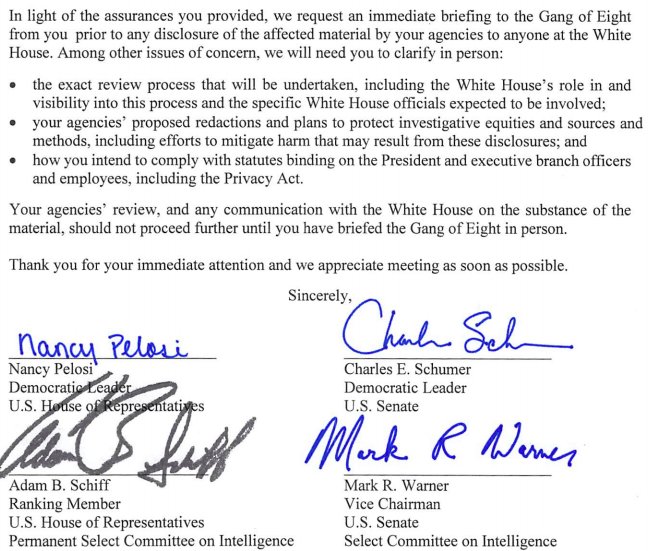 Even more stunning, is the fact that the Democrats even admitted that many top Trump officials within the DOJ and FBI got together and agreed to withhold information from the President of the United States.

Will Chamberlain, who is a Washington D.C. attorney said that the letter creates a constitutional crisis, and immediately urged Republican lawmakers to take action against all lawmakers who wrongfully signed it. He said…

“You are equal branches of government, but they’re not subordinate to you,” Chamberlain said of the letter signers. “I’m sorry — President Trump has not issued a request to the intelligence agencies that they declassify this information, he has issued an order. President Trump has issued an order to his subordinates to declassify certain information related to the Russia investigation. He has plenary declassification authority as the President of the United States. The FBI and DOJ are subordinate to him. Congress does not get to order Executive Branch officials to defy a president … that is actually a constitutional crisis.”