As previously reported by Evans News Report, the majority of American Unions have come to utilize their power and massive resources to push for globalism and socialist ideology over the needs of America and the American worker. As a result, Unions have bled membership, and even the support of their own members, as those members turn to President Trump and ‘America First’ candidates who put freedom, choice, and the American workers over political ideology.

In fact, union worker support for President Trump is at an all-time high during the 2016 presidential election. An election that led to President Trump’s election wins in Wisconsin, Minnesota, Ohio, and other strong union states that typically lean left, or have not been won by a Republican candidate for decades. Now, as President Trump has followed through with his campaign promises, and led America into a position of economic strength, political candidates like Kansas gubernatorial candidate Chris Kobach (KS-R) are showing strength in the midterm election cycle. Republican candidates who ran on a Trump-like platform that prioritizes the American worker’s needs, and puts both non-union and union workers first, instead of the foreign workers and illegals who Progressive-Democrats and Unions seem to now consider their highest priority!

In September 2015, Breitbart News reported that AFL-CIO President Richard Trumka said to MSNBC’s Chuck Todd, that in the midst of the Republican primary for president, “probably every” union worker in the United States said “Amen!” when Trump spoke about the crippling impact multinational free trade deals have had on American workers. Ironically, Trumpka wasn’t far off the mark, as many Union members have seen their representation from Union leadership abandon their needs, in favor of the Union boss’ socialist and progressive ideological agenda. Union workers witnessed the North American Free Trade Agreement (NAFTA) passed, which sold out American jobs and wealth, as it pushed corporations to shift the once safe American jobs to Mexico and Canada. They saw the unions fight for the Korean / United States Free Trade Agreement (KORUS), which sold out American jobs and wealth to the Koreans. Then, union members were witnessing former President Obama, congressional Democrats, and RINOS selling out American workers and wealth to the Chinese and other Pacific countries, under the Trans Pacific Partnership (TPP).

Then, there was the Paris Climate Accord, which Unions joined in the fight, in the name of environmentalism.

What would have the Accord meant for America if President Trump would not have withdrawn the United States? The Paris Accord would have had detrimental affects on America on multiple fronts.

Rightfully, President Trump pointed out how the American workers, including union workers were left behind by these free trade deals, and environmental agreements. President Trump said that the American workers had been ignored by the free trade apparatus of the Republican and Democratic Party who were beholden to the big business lobby, tech lords, and the Chamber of Commerce.

Since the President’s election, pro-Trump candidates have run on President Trump’s ‘America First’ platform, as union membership has begun to throw their support behind Trumpian candidates. In fact, President Trump endorsed Josh Hawley who won the Republican nomination in Missouri, James who won the senate primary in Michigan, Shuette who won in Michigan, Balderson who won in Ohio, Scott Walker won in Wisconsin, Ron Desantis, who won his primary for Florida Governor, and Rick Scott who won his Florida Senate primary bid. Also, Kris Kobach won the primary for governor in Kansas. Each of whom support a border wall, an end to illegal immigration, and true free and fair trade deals. Also, they gardnered a growing support of union workers, despite union bosses largely being adamantly opposed to the Republican candidates.

President Trump’s endorsements won in deep blue states like Wisconsin and Minnesota, who have been reliably democrat voters. However, since 2016, union workers have begun to shift their support from democrat blue to republican red. Especially, if the candidates have the support of the President, and especially if they support the President’s agenda.

In fact, pro-Trump candidate, Kris Kobach, who is running for Governor of Kansas ran on the platform of mandatory E-verify, opposition of sancturary ciies, and his fight against mass immigration and illegal immigration unseated the popular establishment republican, following the endorsement of President Trump. Kobach said…

In yet another sign of a defecting working class, Breitbart News reported, Kobach made history by winning the endorsement of the State Council of Firefighters, a workers union that has endorsed Democrats for at least 60 years. Kobach said…

“This is the first time in my lifetime that a major union has endorsed a Republican for governor in Kansas.”

Bob Wing, who serves as the Firefighters Union President said that their endorsement of Kobach was solidified because he is the first populist gubenatorial candidate, who is prioritizing worker’s compensation laws, and is putting the worker first.

Kobach said it best, when he pointed out that…

“The Democrats have given up representing the interests of working men and women of America to make the case for welfare recipients and illegal labor.”

He also noted how illegal workers are taking the jobs of the American workers, thus putting foreign workers first.

In years of the past, the American workers, and even union workers had given up on the democrat party, and certainly hadn’t seen the republican party as any improvement over the democrats. Republican Fabian-Economic Rinos LIKE Paul Ryan, John McCain, Jeff Flake, Lyndsey Graham, and others who embraced the same anti-American worker policies that the Pogressive-Socialist democrats embraced. Policies that include open borders, lopsided trade where foreign governments levied massive taxes against American products and workers, and other progressive policies.

In fact, during the Obama Administration’s leadership, union workers were abandoned, when democrats nixed the Keystone XL pipeline, while embracing anti-worker trade policies like NAFTA, TPP, KORUS, the Paris Climate Accord, increased illegal immigration, DACA, and other policies that hurt the American economy, and cost thousands upon thousands of American jobs.

Yes, the American workers, including union workers had been taken advantage of, had their jobs shipped overseas, and were losing out to the Elitists, as the Clinton Administration, both Bush Administrations, the Obama Administration, and even by many within their union leadership’s rank and file, as they sold out to globalists and the globalists socialist and communist ideology.

Now, since the election of President Donald J. Trump, union members, and the American workers are finally feeling a sense of pride, respect, and growing success. In fact, Breitbart News reported that a majority of swing-voters say that they oppose the importation of more foreign workers, and nearly half of Americans telling pollsters that illegal immigration crushes their wages. 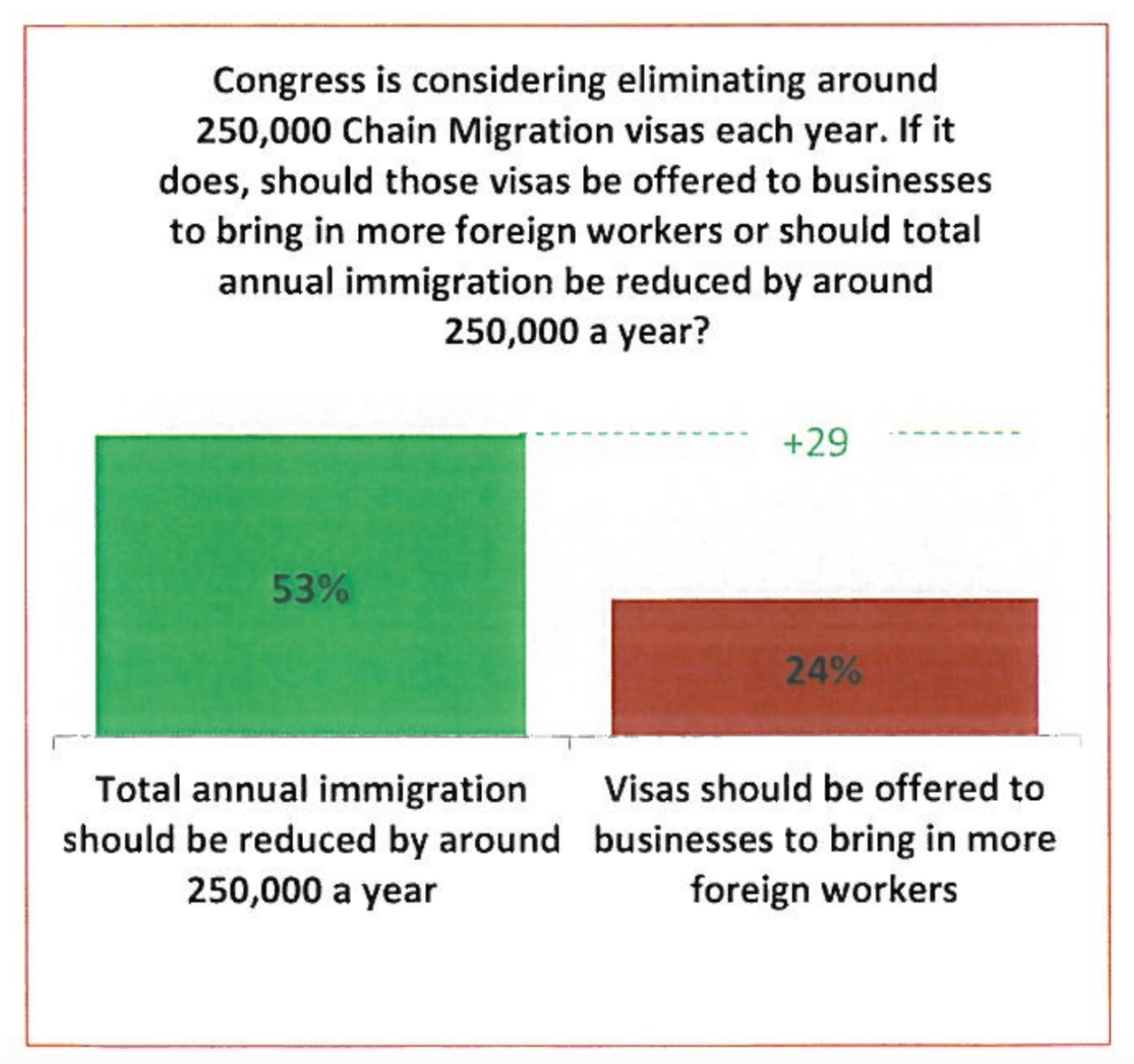 Before the election of President Trump, young white men favored Democrats over Republicans, but now, that tide has turned, as they turn to pro-America First candidates.

Therefore, as the Mainstream Media and Democrats ignore the pleas of their own voters, President Trump will continue to gain momentum across the country, even in the darkest blue states. Other political candidates would do well to observe and join in with a movement that is gaining traction, despite the declarations by the democrats and their mainstream media propaganda machine of a ‘so called’ blue wave. They will soon realize, that it is nothing more than a pipe dream, as Americans embrace the ‘America First’ agenda in ever-increasing margins. WHY??? Because the American people, and the American workers can finally be heard. They finally have a voice, as President Trump and ‘America First’ candidates fight for the ‘forgotten men and women’ throughout this great land. They fight for the American people, despite the never ending ‘RESISTANCE’, which is leveled against Trump, and anyone who dares defend his pro-America agenda.

In the coming years, it his likely that union member support for President Donald Trump will continue to grow, regardless of what their union leadership tells them, or instructs them to do. Unfortunately, many times, unions use workers’ dues to support a progressive-socialist agenda like supporting illegal immigration, DACA amnesty, gay and transgender marriage and rights, global warming, anti-Police movements, or the appointment of progressive Supreme Court Justices. Meanwhile, those radical left-wing policies hurt union workers as illegals take American jobs, increased minimum wages cause decreased jobs, and ultimately layoffs and higher prices in their pocketbook when they go to buy coffee or food. Then there is the left’s environmentalist agenda, which has resulted in the shutting down of coal mines, killing of oil production or pipelines, which cost more jobs, all while astronomically running up those workers energy costs for their homes and cars.

Now, after the election of President Trump, and the growing popularity of anti-Establishment, pro-America First candidates, it is highly likely that the upcoming November midterm elections will be more of a ‘red, white, and blue wave’, as Trump’s new populist-nationalist agenda sweeps the primaries and midterm elections. In the meantime, left-wing progressive newspapers like The Washington Post, will continue to release articles like ‘Republicans suddenly seem to like unions again‘. However, either the mainstream media just doesn’t get it, or just maybe, they don’t want to understand why Trump and his agenda have such a powerful affect on Americans across this great land. However, if they did understand, their article just might read: ‘Pro-America First Republicans are once again fighting for not only America’s union workers again, but for all of America’s forgotten men and women throughout this great land’.