In the United States, hate crimes are on the rise by the socialists and communists throughout our nation. Meanwhile, ideological attacks have started to become more common, as they utilize communist doctrine that encourages violence as a means to overthrow capitalist governments, and societies that call for the freedom, creativity, and individualism of their people. Nations like the United States, who are blessed to have the Constitution of the United States to preserve and protect those sacred freedoms. However, despite all the protections that it provides, our Constitutional Republic has never been more at-risk than it is today. In fact, we don’t have to look very far to see where America is headed. Especially, if we embrace the Progressive-Socialist and Communist propaganda that the Progressive-Democrat Party, and Mainstream Media are peddling today. In fact, we can simply look across the Atlantic ocean to the European Union, where the British are throwing journalists in prison for reporting on the crimes of the Muslim migrants, and they are slowly taking away right after right, for the British people. Meanwhile, the European Union has un-vetted Muslim refugees who have flooded the continent. As a result, it has brought about a huge increase in violent attacks against Christians and non-muslim conformists. Attacks that include stabbings, rapes, beheadings, murder, female genital mutilation, forced marriage with underage little girls, and so forth. Now, the epitome of evil, by the One-World Progressive leadership in Germany has regressed to such a barbaric state, that the German government, and their Chancellor Angela Merkel has condoned and participated in one of the largest crimes in history…The cover-up of the most hideous and grotesque crime sprees, all for political gain.

We reported on this incident back in April, translating a German report, since the English-language media didn’t find this incident newsworthy. But at that time, the fact of the beheading was not being reported, and now the German authorities have apparently banned all reporting on the incident. Anything to keep as many Germans as possible ignorant and complacent regarding just how devastating the Muslim migrant influx into Germany really is. 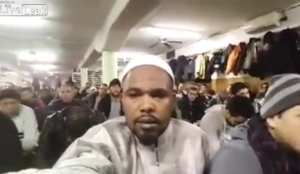 German media has been banned from reporting on a Muslim migrant who allegedly beheaded his one-year-old baby daughter in Hamburg.

Angela Merkel’s pro-migrant government has banned German media from reporting on a barbaric crime involving a Muslim migrant who allegedly beheaded his one-year-old baby daughter on a train station platform in Hamburg.

According to eyewitnesses, the 33-year-old suspect, Mourtala Madou, beheaded his one-year-old daughter in front of a horrified crowd of commuters at Jungfernstieg station on Thursday April 12, and then stabbed his German girlfriend, the mother of the child.

The suspect allegedly stabbed the infant from behind, while she was sitting in her stroller, and then severed her neck. He then allegedly stabbed his girlfriend in the chest before fleeing the scene, dumping the murder weapon in a train station trash can. He was later arrested

The woman, a mother of four other children, later died at hospital of her injuries.

The incident was caught on tape, and smuggled past the German government, and then posted on YouTube.

To the amazement of any rational human being, it is astounding that progressives would fight to cover up such a heinous act. However, the progressives believe that they can use the muslims to eradicate conservatism and institute a communist One-World government, while the muslims believe that they can use progressives to erradicate christianity and institute a One-World Theocracy. Regardless, it is a love-hate relationship, where they tolerate the other, but only as a means to an end. The problem with the relationship between the two, happens to be the fact that mankind has to pay the ultimate price for the progressive-socialists lust for power, and the radical muslims passion for the extermination of anyone who refuses to embrace their religion.