Throughout the history of traditional politics, America has been faced with a two-party system. As system that was designed to represent two factions and ends of the political ideological spectrum. They included the Federalists and the Anti-Federalists.

The Federalists believed in a very strong central government, with very little power placed in the hands of the states. They wanted the states to answer directly to the federal government, and be directly subject to their will. However, the Anti-Federalists believed in a less powerful government, and stronger states. They feared what had been repeatedly exemplified throughout history, that when power rests in the hands of a few, our liberty and freedom’s are consequently lost. In fact, One of America’s greatest Anti-Federalists said it best when he said…

“I hope we once again have reminded people, that man is not free unless government is limited. There’s a clear cause and effect here, that is as neat and predictable as a law of physics: As the government expands, liberty contracts.”

Federalists also believed that the states should have little representation, and that representation should be equal. That is where the United State’s Senate was born from. Meanwhile, Anti-Federalists believed that the States should have more representation, with less power in the hands of the Federal Government. That is where the United States Congress was born from. Also, as an insurance policy against an out-of-control  Government, where the highly populated cities would control the actions of the government, thereby hurting the rural farmers and the small town citizens. As a result, Anti-Federalists proposed and established the electoral college, at the Constitutional Convention, to be an insurance policy against the control of the majority, over the control of the minority. Ironically, Democrats claim to be the fighter of the minority, but once again, they fight to end the electoral college, so they can grab power, and rule over all American’s at will, without any consequence, or chance of being removed from that power.

Consequently, normal liberal politics involves free speech, argument about differing ideas, and persuasion of the masses towards those ideas. It was exemplified by two sides, federalism (strong central government), and anti-Federalism (weaker central government), and was envisioned as those two sides finding compromise in the middle. Also, if government went too far towards either side, the voters could overturn the election results, a few short years later during the next election cycle. The system wasn’t flawless, but it has proven to be the greatest government on earth that has been envisioned by man. However, as the years have progressed, Democrats began moving further and further towards the Socialist and Communist end of the spectrum. Also, Democrats knew that calling themselves Socialists, let alone Communists would not be accepted by ‘We the People’; therefore, they changed their name from liberals to Progressives. Now, they are revealing their true nature, as they promote Socialism and Communism in Colleges and Universities, in the Mainstream Media, and even political candidates like Bernie Sanders (VT-D), and Democrat Congressional Candidate Alexandria Ocasio-Cortez, a 28-year-old who ran as a socialist and beat her more moderate Progressive-Socialist Democrat rival in the New York this past week.

Even the Democrat Party has put Tom Perez as their DNC Chair, and Keith Ellison as the DNC Deputy Chair. Sadly, Perez has openly stated that he supports Islamic Sharia, which is antithetical to the United States Constitution, and our Bill of Rights. He has also stated that racism is a “white on black phenomenon”, and if a black person attacks a white person, it only because they were discriminated against. Also, he said black applicants for jobs should be given preference over whites. In addition, Perez has stated that illegal aliens should receive in-state tuition rates, over their American counterpart, especially white Americans. Then, there is Deputy Chair Keith Ellison who has proudly posed for pictures with pro-Communist literature titled “Antifa: The Anti-Fascist Handbook,” written by Dartmouth visiting scholar and historian Mark Bray. The book provides a history of anti-fascism movements and guide to aspiring radical Communists. 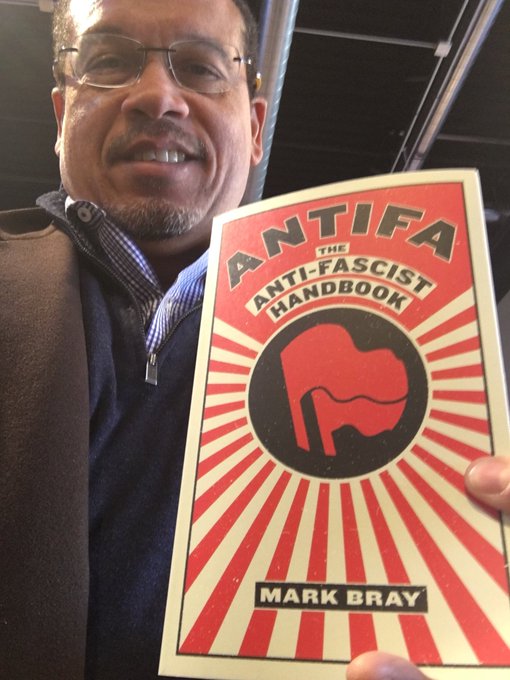 In addition, Keith Ellison has not only been seen with the pro-Communist literature, but he has a long history of anti-Semitism, and has continually defended Reverend Louis Farrakhan, who is the most notorious and public anti-Semites in our country. Farrakhan described Judaism as a “gutter religion.”

Then, there is the infamous former Presidential Candidate Hillary Rodham Clinton, who announced on live television that being a Capitalist “Probably” hurt her in the Primary, because many Democrat voters in her Party are Socialists. (VIDEO BELOW)

In recent years, Democrats have used any number of tactics to influence American’s to accept Socialism and the Communist ideology over Capitalism and our Constitutional Republic. They have used the power of education to alter and influence the minds of the youth, Mainstream Media to cover up any news that shines a bad light on their agenda, while shining a good light on the Socialist agenda. However, they have also employed another tactic, in their communist arsenal to sway the American voter to their point of view. It is called Political Correctness! It came into use in the 1920’s, when the Soviet Union (modern-day Russia),wanted to re-align the views and terminology to the views of the communist agenda. As the Soviet’s once said…

“Comrade, your statement is factually incorrect.”

“Yes, it is… But it is politically correct?”

Today, “political correctness” has been embraced by the Progressive Democrats to criticize, demoralize, and demonize any American whom goes against the Socialist and Communist movement.

The First Amendment of the Constitution states…

Congress shall make no law respecting an establishment of religion, or prohibiting the free exercise thereof; or abridging the freedom of speech, or of the press; or the right of the people peaceably to assemble, and to petition the government for a redress of grievances.

Constitution of the United States, Amendment I

Nowhere, does the Constitution say that Congress shall make no law abridging the freedom of speech, or of the press!

Today,  “politically correctness” threatens to strangle the public conversation that nurtures democracy, and the growing numbers of skeptics eager to show their righteous contempt for it might be interested to know the origins of the term, which has been revived from its original use. It’s a wicked attitude intended to stifle the conscience and suppress belief and conviction.

The term “politically correct” was coined in the late 1920s by the Soviets and their ideological allies around the world to describe why the views of certain of the party faithful needed correction, and a re-alignment to the party line. In fact, Joseph Stalin embraced ‘Political Correctness’, as a way to control every aspect of the ‘collective’s’ (the people’s) lives.

Today, Socialists and Communists, who like to be called Progressives in their attempt to mask their true intentions, use political correctness to nudge America ever-closer to their Communist ends. They have used Colleges and Universities, to train their “revolutionary” foot soldiers, while they have used those Progressive soldiers to infiltrate corporations, churches, government agencies, media organizations, and all other areas throughout the country.

The ‘Progressive Revolution’ requires that they suppress the thoughts, ideals, and expression of all those who oppose their aims. They look at the communist collective as a noble cause that should be conformed to by willing submission, or if they refuse, by either by deception, or BY FORCE! As a result, Progressives look at liberty and freedom as a threat to their cause.

Sadly, Progressive idealists lack the understanding of human liberty. For example, you hear them call Conservative’s Fascist, but true Conservatism is the lack of government or anarchy. You hear Progressive’s call Republican’s racist, but it was the Republicans who fought for the freedom of slaves, and civil rights of Blacks, while Democrats UNANIMOUSLY OPPOSED BOTH. You hear Progressive’s call Republicans anti-woman, but it was the Republicans who fought for the rights of women, while Democrats opposed it. Progressive’s have called Republicans cruel and inhuman for embracing the death penalty for ruthless murderers, but it is the Democrats who fight for the right to exterminate innocent young babies, who haven’t even had a chance to have a bad thought.

Today, we are subjected to a constant barrage of falsehoods and mis-information, as the Progressive’s fight to end the Constitutional Republic. Just one example involves CNN’s Don Lemon, who says that the Progressive border policy fight is about White People…

“Losing their privilege. And that’s what this is about.”

Over the past year, Democrats have tried to demonize Republicans, but President Trump and Republicans have tried to make it safer for the children who come across the border by combatting smugglers, human trafficking, and sex trafficking. The President has moved ever-closer to completing yet another promise. A December 21st promise to the American people that he would eliminate the incentive of human trafficking. In fact, when President Trump was elected, he vowed to end human trafficking, and he is working to keep his promise. According to government statistics, approximately 1 million children, both girls and boys in the United States are trafficked for sex. Now, with President Trump’s Executive Order, if human traffickers, smugglers, or sex traffickers get caught with kids, they will immediately receive a DNA or other biometric test. Then, they will have to be subject to America’s justice system, and ultimately our prison system. Also, DNA testing would serve as a means to return some of the children to their parents. Also, since President Trump was sworn in on Jan. 20, 2017 authorities have arrested an unprecedented number of sexual predators involved in child sex trafficking rings in the United States.

Reports now indicate, that in President Trump’s first month in office,  the FBI arrested more than 1,500 sex traffickers. A dramatic increase from previous years. Also, in 2018 the President’s record on human trafficking arrests has skyrocketed to a massive 5,987, and that goes to just June 23rd. Still, the Mainstream Media and Progressive Democrats cover up the truth, and push falsehoods and misleading statements, because they don’t really care about the children. They don’t care about immigrants. They don’t care about women or men, blacks or whites, gays or straight’s. They ONLY CARE ABOUT IDEOLOGY!

After all, in the end, political correctness is not about what is right, what is real, or what is truth. It is actually about the Progressive agenda. It is about an agenda that looks to throw away the traditional two-party system where two opposing viewpoints find a point of compromise, somewhere in the middle. It is about implementing a Socialist agenda with a Communist State that puts the Elitists at the top, ruling over everyone else at the bottom. They use identity politics and political correctness to divide and conquer. They use it to divide blacks and whites, men and women, gays and straight’s, rich and poor, illegal immigrants and legal immigrants, and Conservatives and Moderates. Then they use political correctness to make anyone who disagrees with their agenda a racist, anti-Feminist, anti-Semite, and so-forth.

Ultimately, they hope to achieve a Communist State that doesn’t care if you are black, white, man, woman, rich, or poor. The only thing that would matter is YOUR SUBMISSION TO THE COLLECTIVE. Any, and all speech that defies the government would be illegal and subject to prison or death. American’s Constitutional rights would cease to exist. The freedom of speech, press, to assemble, vote, or address one’s grievances. Yes, everyone would be equally poor, equally silent, and equally afraid to question. That is, except the Political Elitist Class, who rules over the nation.