Earlier this week, in a roundtable meeting over illegal immigration, sanctuary cities, and combating the brutal MS-13 gang members. Fresno Sheriff Margaret Mims expressed the difficulty in working with Immigration Customs Enforcement (ICE) due to sanctuary laws interfering with their capture, and enforcement of MS-13 gang members. Trump gave his usual response to the ruthlessness of the MS-13 gang and called them ‘animals’.

The exchange went as follows:

MIMS: There could be an MS-13 gang member, I know about, if they don’t reach a threshold, I cannot tell ICE about them. [Emphasis added]

TRUMP: We have people coming into the country — they’re trying to come in, we’re stopping a lot of them — but we’re taking out of the country. You wouldn’t believe how bad these people are. These aren’t people. These are animals. And we’re taking them out of the country at a level and at a rate that’s never happened before. And because of the weak laws, they come in fast, we get them, we release them, we get them again, we bring them out. It’s crazy. The dumbest laws, as I said before, the dumbest laws on immigration in the world. So we’re going to take care of it. We’ll get it done. [Emphasis added]

It is highlighted the brutal MS-13 gang violence before, and has even used the phrase “Animals” to describe the ruthless illegal immigrant gang before.  The bloodthirsty gang has even been classified by the FBI as the

“most violent and organized criminal network in the United States.”

Regardless of the facts, or the truth, within hours of the Presidents comments, the Daily Beast spearheaded a new attack on the President. Rather than reporting that the President called “some deported immigrants” animals, and failed to connect the MS-13 gang members, obviously in an attempt to smear him. The Daily Beast Headline Read…

REALLY? Trump on Some Deported Immigrants: ‘These Aren’t People. These Are Animals.’

“This is disgusting, and his evangelical sycophants will applaud his utter dehumanization of men, women, and children.”

@realDonaldTrump is lying on immigration, lying about crime and lying about the laws of CA. Flying in a dozen Republican politicians to flatter him and praise his reckless policies changes nothing. We, the citizens of the fifth largest economy in the world, are not impressed.

A tough take down by the California governor after @realDonaldTrump calls people trying to get into the country “animals” not people.

One of Trump’s most consistent rhetorical moves is comparing large classes of human beings to animals — a political tactic with a long and deadly history https://twitter.com/elisefoley/status/996839161972903936

“’These aren’t people. These are animals.’ – Trump says of (some of) the immigrants being deported during his sanctuary cities roundtable”

The Guardian went even further and published a report that edited President Trump’s remarks, and intentionally omitted the portion where Sheriff Mims referred to the MS-13 gang members.

A reporter from the Guardian falsely claimed that Trump was referring to “some immigrants” when he called MS-13 gang members “animals.” The Guardian report posted an edited version of Trump’s remark, specifically omitting the portion where Sheriff Mims refers to MS-13 gang members. She said…

“Trump just verbatim referred to some immigrants as animals. “These aren’t people, these are animals.” Fuck everyone who voted for him & everyone who continues to appease him.”

“Trump referring to human beings as “animals” is the same dehumanization tactic used by slave traders and slave owners to justify the oppression of black people for hundreds of years.”

Tyler Hansen who is a researcher for the Democratic Congressional Campaign Committee went even further and posted pictures of hispanic children and families crying in conjunction with blatant distortion of Trump’s words, and slander against the President. He posted…

Trump: “We’re taking people out of the country — you wouldn’t believe how bad these people are. These aren’t people. These are animals.”

President Trump during California #SanctuaryCities Roundtable: “These aren’t people. These are animals.”

The Infamous supposed comedian Kathy Griffin, who took heat for posing in photos of herself holding Trump’s bloodied and decapitated head, joined in and said…

How the f**k isn’t this a breaking news story. The President of the United States calling immigrants animals. He’s acting like it’s just the criminals but he really means all immigrants.

I am f**king disgusted 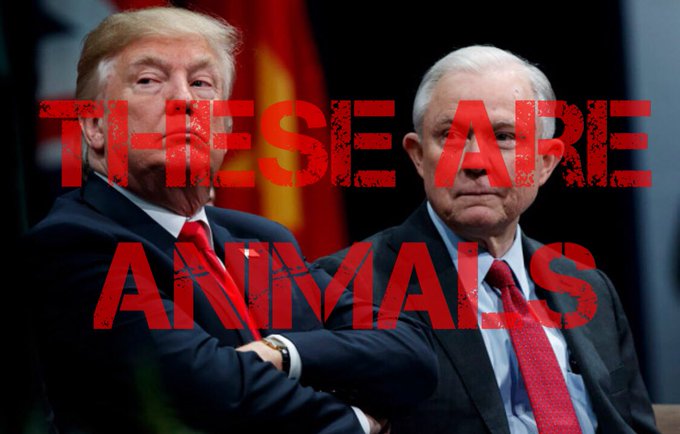 This is scary, despicable and forboding. The worst among us are in charge and it’s getting worse every day. Seriously, this is chilling full on Nazi talk.

YES, HE IS A DEHUMANIZING BIGOT-MONSTER; BUT ALSO, HE HAS NO IDEA WHAT HE’S TALKING ABOUT. HIM TALKING ABOUT LAWS IS LIKE A CHIMP TALKING ABOUT BRAIN SURGERY. PLEASE SOMEONE STOP THIS.
Andy Richter, Conan O’Brian Show

ICE is deporting people who’ve served multiple tours in the US Military. Something Officer Bone Spurs never did. They’re deporting people who love America more than Trump will ever pretend to. Are they the “animals,” Donny boy?? Shame on him.
Sophia Bush, Actress

Today Trump called illegal immigrants “animals”.
And like every loathsome thing this man does, it’s not only vile, it’s projection.
Cornered and terrified he’s viciously lashing out like a feral beast to try and save himself. What an ugly human being he is. And he’s going down.
Ken Olin, NBC

“These aren’t people. These are animals.” – Trump, speaking in CA about undocumented immigrants.

And there you have it. What lies beneath Trump’s horrific agenda is the same dehumanizing mentality that has enabled war and genocide. Vote this Nov to say, “No. This cannot stand.”

Regardless of the falsehoods, fabrications, lies, and distortions, President Trump is 110% correct in calling these criminal thugs ‘animals’. Many would even go further in saying that it would be wrong to compare animals to the MS-13 gang members. That is because they are so brutal, so full of hate, so ruthless, and so sick.

On Thursday, Breitbart News listed just a small sample of what the ruthless and evil MS-13 Gang has proven to be capable of perpetrating on the innocent and unwitting American Public. They included crimes like…

Regardless of the facts, the Progressive-Socialist Democrats,  Hollywood Elitists, and the Mainstream Media are doubling down against President Trump and his referencing MS-13 gang members to ‘animals’.
For example, Democrat Chuck Schumer said…

When all of our great-great-grandparents came to America they weren’t “animals,” and these people aren’t either.

Therefore, regardless of the facts, negligent of the truth, and without merit, the Progressive Socialist left, and even a number of Fabian-Economic Rino Socialists have chosen to warp reality, twist truths, and distort news reports. After all, the ‘resistance’, and ‘Never-Trumpers’, have tried every other means to bring down a duly-elected President. They have used dirty politics, corrupt Deep-State officials, and a shameful ‘Witch Hunt’ to try and bring down Trump, only to fall into their own web of lies, distortions, criminal actions, and hate speech. Now they are resorting to twisting truths, and mincing words. A tactic that is doomed from the start. However, they have been able to prove one thing true! They have proven that they will stoop to any level, spin any number of lies, and commit any crime, so long as they stop President Trump and his Make America Great Again agenda. After all, then and only then, can they put America back on its former dark path towards Socialism, and their dream of a One-World Communist Government, with the Elitists at the top, and the rest of America at the bottom.