Following yesterdays nearly hour-long on camera live meeting between the President and a bipartisan Congressional delegation, many of his base supporters became increasingly worried about his comments. During his meeting, President Trump showed himself to be in charge, and showed himself to be a leader in the meeting. In fact, CNN admitted that this was not a photo-op, but instead a negotiation. They even said that the meeting showed him deal-maker.

President Trump projected himself, not only as in charge, but he demonstrated a person who was willing to be reasonable to all sides of the argument. A narrative that no one in the mainstream media has ever stated or admitted to. Also, since President Trump’s campaign for President, he promised the American people repeatedly that he would ‘build that wall’, when talking about the border wall along the southern American border with Mexico. It was one of the most energizing aspects of his campaign, as it drew massive crowds, and crushed the Progressive Democrats call for open borders. Now Democrats are faced with a ‘death if we do, death if we don’t’ scenario, and all because President Trump skill-fully cornered them. If the Democrats fund the wall, they will alienate their base. However, if they strike a deal on DACA while funding the wall, they would alienate another part of their base.

Now, many conservatives are greatly concerned as the President made the statement that they would do DACA, and then immediately go into phase two which is “comprehensive immigration reform.” 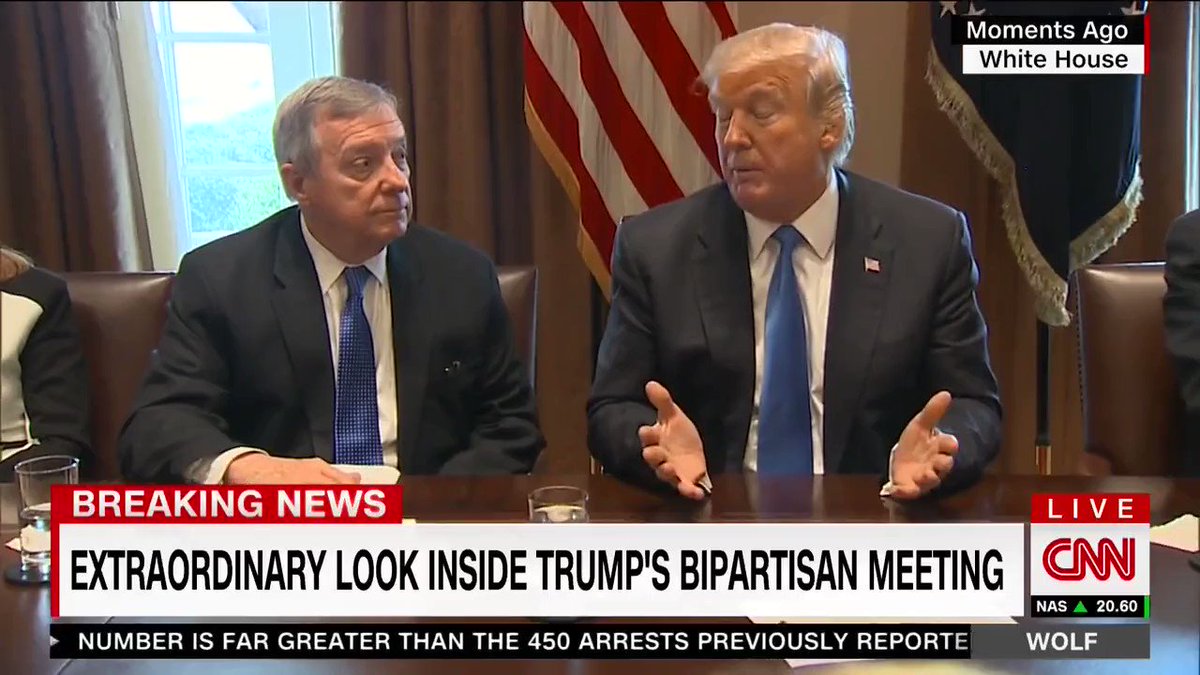 Who is this man?
President Trump today told a bipartisan meeting of senators and representatives that he will sign ANY immigration legislation that reaches his desk.

Other sites like Breitbart, Conservative Review, Mark Levin and other’s voiced grave concerns about the fact that President Trump appeared to say he was simply going to rubber stamp any “DACA deal” that reached his desk. A statement that has left many of the President’s supporters shocked and on edge. Meanwhile, the Republican congressional members pushed the idea of ‘Merit Based Immigration’ and the idea of ‘closing the borders’ to illegal immigrants flowing across the border. The political dividing line is in creating a “pathway to citizenship.” If that’s in either a DACA bill or ultimate comprehensive reform, it truly is amnesty. And it’s what the old Gang of 8 members still want.

Following the meeting, President Trump tweeted out the following statement:

“No. No. No.” he replied after a reporter asked him if he would sign a DACA bill even if it did not include funding for building the wall on the Southern border.

Despite, the President’s attempts to clarify the comments, his conservative base has remained increasingly critical and concerned of his intentions regarding DACA. For example, Wednesday on the “Ingraham Angle”, Laura Ingraham stressed the importance of any deal MUST END chain migration and include a wall along the southern border for national security. She went on to say that

“when it comes to any DACA deal, the president has got to realize there’s just two things that matter above all else — number one, DACA is the only leverage the president has to implement his entire immigration agenda,” and she went on to say that secondly, “Democrats favor granting citizenship to illegal aliens because they believe it is the absolute key to achieving a super-majority, just like the one they currently have in California.

They want that in every key battleground state. So, there’s so much more at stake than just the future of the DREAMers. This deal could decide the fate of the country. I’m going to wait and see what the final DACA proposal looks like. But if it does not include a wall – a real wall, not a see-through wall, expect a political revolt from the base, which means losing the House and maybe even the Senate. And by the way, [ending] chain migration — absolutely necessary.”

Ingraham along with other conservatives have had other concerns, because recently leaked information from the Democrat’s, and information coming out from other sources showed that if illegal immigration continues along the border, and at the current rate, Democrats will take a supermajority in States like Texas, Florida, Arizona, Georgia, and North Carolina. States that are traditionally Republican, or lean Republican would become more like California in the near future, and as a result, the Democrats would become unbeatable in elections as President and in the House and Senate. As a result, the United States would no longer truly be a two-party system, and Progressives could easily transform the United States Constitutional Republic into a Socialist State, and eventually a Communist State. The reason for the Democrat’s gaining a supermajority would be in that those fives states host a large numbers DREAMers, as Fortune magazine reported last January. Also, since Florida carries 29 electoral votes, NC carries 15, Georgia carries 16, Arizona carries 11, and Texas carries 38. As a result of the illegal immigration, Republican-leaning states could see enough of a shift, that it would make the election of anyone other than a Progressive-Socialist Democrat impossible in future elections.

The Center for Immigration Studies released the contents of the DACA deal revealed by the Gang of Six, and it included:

Therefore, there would be no criteria for waiving criminal convictions since there are no specifications for what “in the public interest” really means, Dreamer illegal aliens would be eligible for citizenship within twelve years with no requirements, so long as they are willing to wait for at least 12 years. The visa lottery doesn’t truly end for twelve years, despite the fact that it has resulted in multiple terrorist attacks on the United States, and chain migration continues at the same rate as it has during the Obama Administration. The agreement doesn’t make illegals pay any back taxes if they worked illegally, and allows for the ‘waiving’ of criminal convictions. It doesn’t fund ICE or interior enforcement, expand E-Verify, nor address our broken asylum system, sanctuary cities, or the influx of illegal families and minors from Central America. It does not address the issue of visa overstays, entry-exit system, or the backlogged immigration court, illegal employment, or any of the other immigration needs. It does not even fund but a small fraction of the border wall. Not enough to even start building the wall along our southern border.

As a result, it is no surprise that President Trump emphatically rejected the so-called bi-partisan agreement. It did nothing to address our immigration needs, and did everything to encourage future illegal immigration. The Republicans and Democrats that constitute the gang-of-six are all cut from the same cloth. They all work towards the same ends, and that is to push forward on a socialist agenda based on Fabian-Economic Socialism.

Ironically, the gang-of-six had been working for months on a plan to protect people who arrived in the U.S. as children, many illegally, but following a quite successful televised meeting between the President and bi-partisan members of Congress, the six Senators finished their month-long immigration plan that night, and handed it to the President the following day. A plan that they knew would end any progress that had been made on the previous day. They introduced a plan that went against everything that was discussed in the meeting on the prior day, and officially killed the DACA deal.

According to the New York Times and other Mainstream Media outlets, it was reported:

President Trump on Thursday balked at an immigration deal that would include protections for people from Haiti and African countries, demanding to know at a White House meeting why he should accept immigrants from “s***hole countries” rather than people from places like Norway, according to people with direct knowledge of the conversation.

It was revealed that Senator Dick Durbin (D-IL) was the Senator in attendance who claimed that President Trump used the term ‘s***hole’ when shown the Gang-of Six’s DACA Amnesty plan. However, it was Durbin who made up a story about a private White House meeting in 2013. It was during the negotiations over the debt ceiling, where Durbin said that one GOP House leader told then-President Obama, “‘I cannot even stand to look at you.” There was only one problem: it never happened. The Obama White House even denied such an exchange never took place.

Since Durbin’s accusation against Trump, the President has denied using the profanity in describing third world countries, and multiple White House officials and Congressional leaders re-affirmed Trumps denials. There has been no one who can confirm his allegations against the President, but numerous leaders who deny that the President ever said ‘s***hole’. Despite the evidence, the Mainstream Media, Democrat Party, and Fabian-Socialist RINOS pound the President in an attempt to gain traction towards a socialist state. It was an intentional ‘hit job’, designed to end negotiations, and push a Progressive-Socialist agenda that would give amnesty to hundreds of thousands of illegal immigrants.

President Trump was skillfully negotiating a DACA deal that would be agreeable to both Republicans and Democrats, and even said that he would “take the heat off of both Republicans and Democrats.”He told the Congressional leaders to “just get the deal done.” But, that wasn’t what the Democrats wanted, and certainly not what Fabian-Socialists or their Progressive counterparts wanted. As a result, the DACA negotiations are in limbo, and Congress is now pushing for granting amnesty to countless illegals with the ultimate goal to water down the American voter base. A movement that would sink the United States ever-so-closer towards a Socialist One-World Government. A move that would astronomically grow the Democrats voter base, and enable them to move towards their ultimate goal of a Fabian-Socialist economy, and a Communist state.

One thought on “After President Trump Gave An Olive Branch, The Gang-Of-Six Intentionally Sabotaged The Negotiations For Political Ends…”